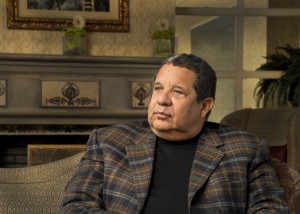 On February 23, 2011, I met Michael in the lobby at his recent acquisition, The Roberts Riverwalk Hotel and Residence, formerly the Detroit Omni Hotel, which is being re-invented by visionary entrepreneur, Mr. Michael V. Roberts.  Sitting in the hotel lobby, overlooking a snowy but majestic view of the Detroit River, I asked him what ‘sustainability’  factors would be used in the hotel renovation.  In a wide ranging discussion that followed, he pointed out that he is studying the feasibility of converting a patio area into an all year ‘tent’ style banquet facility that would be heated and cooled using advanced geo-thermal. Naturally, all the lighting in the 126 room hotel and residence are, or will be converted to LED or other forms of advanced low wattage lighting that will result in a 50-80% saving in electricity. He also indicated that bathroom fixtures and the new toilets will use low water flush systems. Somewhere in the mix of priorities he mentioned the possibility of a roof top vegetable garden and may investigate the advantages to install solar on the roof as well.  No stranger to sustainability,  Michael V. Roberts already pioneered an effort to construct a residential community of 24 new single family homes to LEED standards for environmentally sustainable and responsible development.

I’m glad I had the opportunity meet Michael V. Roberts before I got back to my office and surfed his impressive web site ‘in depth’ …or I’d have been too much in awe of this man’s achievements.  If ever there was one, this is a true American success story, the kind we’re all proud of.

Since his modest start in business in 1974, Michael and his brother Steve, have amassed a global empire in diverse industries such as broadcasting, tele-communications, theaters, resorts, residential and commercial real estate, shopping centers, aviation, and hotels.  There’s more.  A  lot more …and to see the scope of his enterprise visit www.michaelvroberts.com and be glad he is bringing his resources to Detroit.  Whats more amazing is he achieved this level of success in a deliberate and mindful method and is generous enough to share this wisdom in an autobiographical book,  “ Action Has No Season”. This book is his business philosophy for the 21st century, a breakthrough in thinking about how individuals control their own success or failure.”  Written for his children, “In order to ensure their success in this ever-changing global business world, they would need the advice and counsel of a visionary capitalist such as me.”

Click here to be introduced to Elbinger Media Group