Just about a year after it was supposed to go into production, the Detroit Electric SP:01 has been revealed, again, with a slightly-altered-but-still-obviously-a-Lotus look. Can this Tesla Roadster knock-off pick up where Elon Musk left off?

For what it’s worth, Detroit Electric is talking more concrete specifications now, including two different models of the SP:01, the base “Pure” and speedier “Performance” models. While both models will share the same 37 kWh battery pack and 288 km/179 mile driving range per charge, the Performance version will go from 0 to 60 MPH in just 3.7 seconds, compared to the 5.3 seconds of the Pure model thanks to an additional 82 horsepower over the Pure.

The Performance model also gets a manual transmission and a top speed of 155 MPH compared to the single-speed automatic and 106 MPH top speed for the base version. While Detroit Electric hasn’t set a hard price yet, last time around they were quoting a MSRP of around $135,000. That makes even the Tesla Model S look affordable, though the less-powerful Pure model may have been added to address cost concerns.

The 2014 production version of the SP:01 has been altered slightly from the original concept that debuted last year, including a better-looking spoiler and back end and the addition of a pair of hood scoops up front. As Elon Musk found out first hand though, modifying a Lotus chassis to become a battery-electric car is pretty damn hard, which probably accounts for the year-long production delay, as well as the move from U.S. manufacturing to merry ol’ England.

However Detroit Electric did sign a non-binding agreement to provide some 300 EVs to South Korea’s Jeju Island, which could give the start-up the initial volume needed to get going down the right path. It would be nice to see such a historic and storied brand make a comeback, and Detroit Electric has stubbornly refused to disappear.

On one hand it’s easy to poke fun at Detroit Electric for basically copying the Tesla Motors playbook, and the sense of been-here-seen-that sucks a lot of the potential excitement out of the SP:01. On the other hand, if it worked for Tesla, which has no ambitions of building a Roadster replacement anytime soon, why can’t it work for Detroit Electric too? 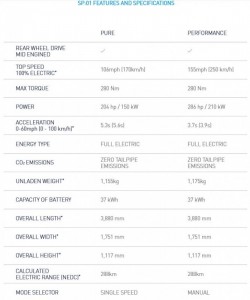