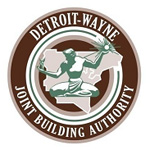 In 2005 the Detroit-Wayne Joint Building Authority (Authority) revised its Mission Statement and added “environmentally appropriate” as a guiding principle. Applying this principle in its daily operations has enabled the Authority to reduce its annual operating budget from $15 million to $8.6 million including a 50% reduction in utility expenses (resulting in three Energy Star designations). These operational savings have also enabled the Authority to move forward with the implementation of a number of long overdue capital improvements without requiring capital funding from the City of Detroit or County of Wayne. These projects include the renovation of the 13th floor auditorium (increasing its capacity from 477 seats to 553 seats) and the restoration of the Spirit of Detroit statue.

The “CAYMC Green Team” will be launched in April. This is an effort to utilize existing janitorial staff to maximize recycling participation of City and County departments residing in the Coleman A. Young Municipal Center.