END_OF_DOCUMENT_TOKEN_TO_BE_REPLACED

The Michigan Department of Natural Resources today announced that the Belle Isle Park Advisory Committee will meet Thursday, Feb. 16, at the park’s Flynn Pavilion, located near the intersection of Picnic Way and Loiter Way, in Detroit. The public meeting will take place from 9 to 11 a.m.
The agenda includes:

END_OF_DOCUMENT_TOKEN_TO_BE_REPLACED

The North American International Auto Show (NAIAS) announced today that through its strategic partnership with Techstars Mobility, nearly 50 startups from around the world will participate and showcase their innovative mobility platforms as part of AutoMobili-D.

“Through our ground-breaking AutoMobili-D showcase, the North American International Auto Show is the first auto show to feature a dedicated startup expo featuring companies from around the world that are tackling every aspect of future automotive mobility,” said Sam Slaughter, 2017 NAIAS Chairman. “Of the startups featured in AutoMobili-D, close to 90 percent of them are currently working with global automakers and suppliers to bring their technologies and concepts to production, a truly remarkable achievement.” END_OF_DOCUMENT_TOKEN_TO_BE_REPLACED

Oprah’s Favorite Things Include This Detroit Made Potato Chip

One of the most coveted stamps of approval in the world was bestowed on the makers of a Detroit potato chip.

END_OF_DOCUMENT_TOKEN_TO_BE_REPLACED

Cathleen Francois Green News You Can Use Detroit, Events, first responders for fitness

Registration is now open for the 2016 Battle of the Badges First Responders Night at the Palace of Auburn Hills.

Support our local heroes at the anticipated “BATTLE OF THE BADGES” event, which includes basketball and tug of war competitions between law enforcement & fire departments from around the Midwest prior to the Pistons game! With every ticket purchased through this offer, a portion of the proceeds will go back to First Responders 4 Fitness programs! Those unable to attend the “BATTLE OF THE BADGES” events can still purchase tickets to the Pistons game that evening and celebrate First Responders Night. This is a limited time offer so hurry and reserve your tickets online today using the offer code FR4F, or print and mail your registration today! END_OF_DOCUMENT_TOKEN_TO_BE_REPLACED 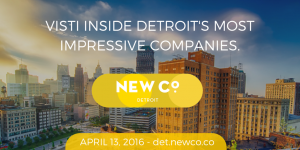 DETROIT, MI – FEBRUARY 22, 2016 – On April 13th, NewCo returns to the Motor City for the fourth year running with newly launched NewCo Tours featuring both women-led organizations and companies “Made in Detroit.”

“We’re continually excited to honor Detroit ingenuity and entrepreneurship through our business festivals. Now that Detroit has been named the first U.S. City of Design by UNESCO, there is even more reason to celebrate,” said NewCo founder John Battelle. “NewCo’s mission is to identify and celebrate new kinds of companies – big and small – creating positive change in how they work, what they create in the world, and who they are as citizens of their community. That is exactly the type of hopeful energy fueling Detroit.”

NewCo Festivals are different from traditional conferences. Festival participants chose which companies they want to explore, then meet company founders directly inside the company’s headquarters. Attendees learn firsthand how each organization drives purposeful transformation in its industry through engaging conversations and hands-on demonstrations led by founders and senior leadership. END_OF_DOCUMENT_TOKEN_TO_BE_REPLACED

Michiganders who receive food assistance are encouraged to file for a Home Heating Credit to make sure they get the full amount of benefits they are eligible to receive.

The Michigan Department of Health and Human Services is making Michigan residents aware of the potential effect the credit can have on federal food assistance benefits available through the Supplemental Nutrition Assistance Program.

Some renters could qualify for increased monthly food assistance if they receive a Home Heating Credit of more than $20 in the current month or any of the previous 12 months and then notify their MDHHS caseworker.

The credit in some cases is a factor in determining the amount of food assistance for renters who don’t pay their heating costs separately. END_OF_DOCUMENT_TOKEN_TO_BE_REPLACED

To deepen the interest of a younger demographic, GreeningDetroit.com has created a new twist on the developing story of Green Style and Efficiency at the 2016 NAIAS. Based on her knowledge of trends, design, and the latest technological advances, GreeningDetroit.com’s spokesperson Jill Dougherty will be reviewing the latest designs and releases of the automotive industry and offering her Top 10 picks for 2016. END_OF_DOCUMENT_TOKEN_TO_BE_REPLACED

Legislature Adjourns for the Year Without Action on Energy Overhaul: A Year in Review

The Michigan Legislature ended its year without passing legislation that would overhaul Michigan’s energy framework. Passing energy reform was one of the early items added the Legislature’s agenda for this term, but efforts to enact these changes won’t be don’t until 2016, if at all. END_OF_DOCUMENT_TOKEN_TO_BE_REPLACED

With the Michigan House set to take up broad energy legislation as early as this week, advanced energy businesses from across the state were in Lansing last week to make their case as to why improvements are still needed to maintain and grow the cost-effective energy investments we’ve seen over recent years. END_OF_DOCUMENT_TOKEN_TO_BE_REPLACED