With the excitement and anticipation of fresh ideas for the rebirth of Detroit, the 16th Annual Future Cities Competition gathered more than 1000 sixth, seventh, and eight graders, from schools all over the Detroit metro area to present their vision of what Detroit will look like in year 2160.
With generous support from a host of sponsors, we now have a vision of the 22nd century through the eyes of regional middle school students. Many of the student projects involved over three month’s work that demonstrate outstanding skill, teamwork, and creativity. Mentored by volunteer engineers, parents, and teaches, the students built computer models, wrote essays and made presentations based on set rigorous standards. Middle school students were encouraged to confront the real world topics of sustainability, social issues, health, medicine, transportation and energy, projecting how our cities will look over 100 from now.  An all volunteer group of judges, many of them professional engineers and scientists from the Engineering Society of Detroit, judged each project.
The big winner was St. John Lutheran School in Rochester. The school took top honors in the 16th annual event, and won a chance to compete Feb. 18-22 at the National Future City Challenge in Washington, D.C. An additional highlight was the Green City award sponsored by GreeningDetroit.com, which went to The Academy of the Sacred Heart in Bloomfield Hills, Michigan.  As an all volunteer effort, Futures Cites exemplifies what happens when the community unites in support of our children.
“Keeping in mind that the future belongs to our children”, Mr. William Russo, president of the Engineering Society of Detroit summarized the competition as a community effort “to nurture the next generation of engineers and scientists by engaging them not only in the core subjects of science, technology, math and engineering, but giving them the opportunity to reach beyond classroom walls to imagine and create the communities of the future”. 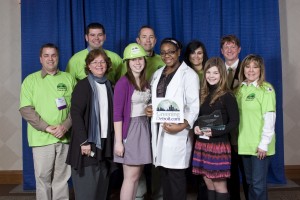 Photo by: Engineering Society of Detroit