The Detroit Water and Sewerage Department (DWSD) Wholesale Customer Outreach Public Education Work Group is continuing to monitor and share information about the performance of the wastewater and storm water infrastructure system tributary to the Detroit Wastewater Treatment Plant.
The 21 combined sewer overflow (CSO) retention treatment basin (RTB) facilities that operate throughout the Detroit wastewater service area play a major role in protecting water quality. From April through October 2012, these RTBs prevented 2.9 billion gallons of combined sewage from overflowing into our waterways. Of this total, 2.1 billion gallons or 72% of the total flow was captured, transported to and treated at the Detroit Wastewater Treatment Plant (WWTP), while the remaining 800 million gallons were treated and discharged from RTBs. These treated discharges meet federal and state National Pollutant Discharge Elimination System (NPDES) permit requirements and are deemed protective of public health. The months of May through October are considered the growing or recreation season in Michigan requiring RTBs to operate under more stringent discharge requirements.
In 2012, high temperatures and low precipitation during the spring and summer resulted in severe drought conditions in the Detroit area by the end of July. Spring went on record as the hottest ever in the Detroit area followed by summer temperatures that tied the existing record. Fall’s cooler temperatures finally brought a return to normal conditions. Overall, the low precipitation for this year’s recreation season contrasted sharply with the record-setting amount of rain received in 2011. In 2012, RTBs went into operation on 41 out of 214 days, but only discharged treated effluent on 13 days as shown in Figure 1. RTBs were able to capture and send the majority of combined sewage flows received to the WWTP for treatment as shown in Figure 2.
With fewer storms triggering RTB operation in 2012, operators focused more time on preventive maintenance and repair activities needed to ensure operations can be sustained when a storm occurs. 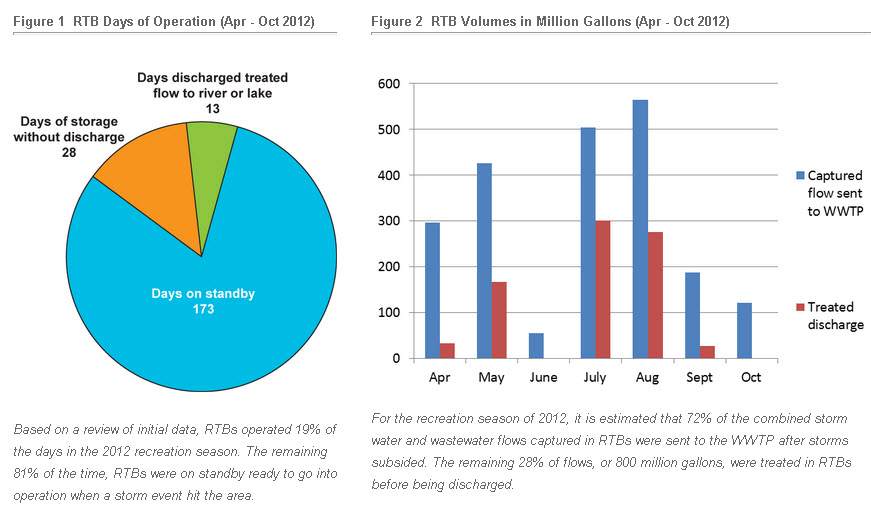