The market for wood gasification boilers is growing in North America. Most are used in rural areas where natural gas in not available, and thus cost of firewood is often very competitive against the alternatives of #2 fuel oil or propane.
In my area of upstate, NY, fuel oil is currently selling for about $3.80 gallon, and propane at about $2.80 per gallon. Firewood is available in the range of $65 per face cord. If one assumes a conversion efficiency of 85% on oil, 93% on propane (via a mod/con boiler), and 80% on firewood (burned in a wood gasification boiler), the unit cost of these fuels is as follows:

From the standpoint of fuel cost, it not hard to see why the demand for wood gasification boilers is growing.
Wood Heating Done Right: When properly applied, wood gasification boilers allow dry firewood to be converted into thermal energy at efficiencies far higher than those of non-gasification type wood burning devices. These boilers can also be matched up with the latest hydronics hardware such as radiant panels, high efficiency circulators, and even mod/con boilers (in cases where fully automatic heat delivery is required if the wood fired boiler is not operating).
One critical detail that must be addressed with any wood gasification boiler is protection against sustained flue gas condensation. The situation is very similar to the boiler protection issues we’ve discussed in many past columns. It can be summarized as follows: If the water temperature entering the boiler allows the fire side of the boiler’s heat exchanger to drop below the dewpoint of the exhaust gases, some of those gases will condense into an acidic liquid that is very corrosive to materials such as steel or cast iron. In the case of wood fired boilers, the condensate also leads to formation of creosote within the boiler, the vent connector, and chimney. Think of creosote as solid fuel. If it’s exposed to suitably high temperature, creosote will combust. The resulting heat can quickly destroy a steel or masonry chimney, and possibly the building with it.

Figure 1
The loading unit combines a high flow capacity 3-way thermostatic mixing valve, circulator, and flapper check valve. When the boiler is warming up, the 3-way thermostatic valve routes all flow through the bypass, and back to the boiler inlet. This allows the boiler to warm up quickly, since no heat is being released to the load. When the water exiting the loading unit reaches a minimum set temperature, such as 130 ºF, the valve modulates to allow some hot water flow to the thermal storage tank. When the water temperature leaving the valve is several degrees above the minimum temperature setting, all water leaving the boiler goes to the storage tank. Thus the loading unit acts as a “thermal clutch” between the boiler and tank, smoothly increasing or decreasing the rate of heat transfer, as necessary to keep the boiler inlet at an appropriate temperature. The loading unit is also internally configured so that it allows thermosiphon flow between the boiler and thermal storage tank during a power outage. Thus, no external heat dump is required when the system is piped as shown in figure 1.

Alternate Approach: Another method of boiler protection use a variable speed circulator as the thermal clutch between the boiler and a high thermal mass load such as a thermal storage tank. The water temperature entering the boiler is sensed, and the electronics controlling the circulator slow it, as necessary, so that the rate of heat transfer to the load doesn’t exceed the rate at which heat is being produced in the boiler. This approach has been used for years in the form of variable speed injection mixing pumps between conventional gas-fired and oil-fired boilers, and lower temperature / high thermal mass loads such as radiant floor slabs. Figure 2 shows how it can be used to protect a wood gasification boiler. 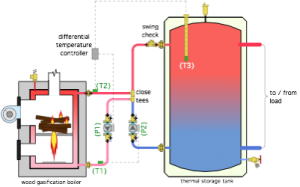 Figure 2
In this system, circulator (P1) operates, at a fixed speed, whenever the wood gasification boiler is being fired. The circulator would be sized to provide a nominal 20 to 25 ºF temperature drop across the boiler when it’s operating at maximum output. If the boiler has relatively low flow resistance (which is typical of most wood gasification boilers), and the piping loop is short, there isn’t much head loss in the boiler loop. Thus, circulator (P1) could likely be relatively small.
Circulator (P2) is a variable speed circulator that monitors the temperature at sensor (T1), installed at the boiler inlet. This circulator operates at a very low speed until the boiler’s inlet temperature rises to where flue gas condensate will not continue to form. For dry firewood and a typical air/fuel ratio, this temperature is about 130 ºF.
Once the boiler’s inlet temperature rises above this “dewpoint” temperature, circulator (P2) speeds up, and thus starts transferring heat from the boiler loop to the thermal storage tank. When (if ?) the temperature at sensor (T1) reaches 5 ºF above the minimum boiler inlet temperature, circulator (P2) would be operating at full speed. As the temperature at sensor (T1) drops back toward the dewpoint, circulator (P2) slows as necessary to prevent condensation in the boiler. Thus, boiler protection always remains in effect.
Another important consideration in the piping design is to allow natural convection between the boiler and thermal storage tank to remove residual heat from the boiler if a power failure occurs while it’s firing. The piping shown in figure 1 will allow this to occur. However, it’s crucial that the check valve shown near the upper left connection on the storage tank is a swing check, rather than a spring-loaded or weighted plug flow check. The forward opening resistance of a swing check is very low, and compatible with natural convective flows. That’s not the case with either spring-loaded or weighted plug flow checks.

Upping the Offering: The schematic in figure 2 keeps the same piping as figure 1, but adds differential temperature control between a temperature sensor in the upper portion of the storage tank, and the outlet of the wood gasification boiler as the means of turning on fixed speed circulator (P1), as well as supplying power for variable speed circulator (P2). The differential temperature controller determines when the boiler is a fixed number of degrees above the temperature in the upper portion of the storage tank, and in effect “enables” the heat transfer process, including boiler protection. It’s essentially the same control action used to start and stop operation of a solar thermal system. Just think of the boiler as the heat source rather than a solar collector. Adding this control functionality eliminates the need for some to manually turn the boiler circulator on and off. 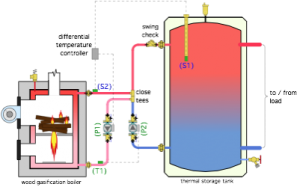 Figure 3
One More Variation: The schematic in figure 3 uses the same logic as the system in figure 2, but adds speed control to circulator (P1). The “∆T” logic controlling circulator (P1) would modulate its speed to maintain a user-set temperature difference between the outlet and inlet of the boiler. The objective is to reduce power demand to circulator (P1) when the boiler output is reduced, and thus reduce overall electrical energy use. 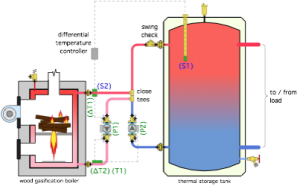 Figure 4
There you have it; modern variable speed circulators matched with state-of-the-art solid fuel boilers. This combination is highly scaleable to larger systems using larger circulators controlled by variable frequency drives (VFDs). It’s also applicable to pellet-fired boilers, which also require protection against sustained flue gas condensation. Keep these details in mind if you have a solid fuel boiler project coming up.

EPA Proposes to Replace and Reduce Harmful Greenhouse Gases Is your biz cap in the crowd?