American Building Maintenance chief engineer Peter Deptula is one of many people in Southeast Michigan actively trying to make a difference by attempting to significantly reduce his carbon footprint. Deptula, who is in charge of heavy equipment such as air conditioners, boilers and other mechanical equipment in an office building in Detroit, recently converted a 1997 Ford Escort Wagon from a gas car to an electric one. He started the process, he said, with the help of the Electric Auto Association, a 501(c)3 nonprofit organization dedicated to promoting Electric Vehicles. 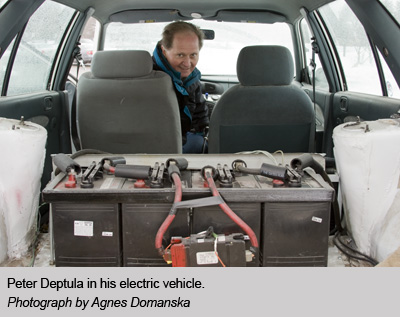 “They are promoting the electrification of automobiles,” he said. “They help people turn their regular gasoline cars into electric cars.”

Deptula said he began working on his car as a result of watching others transform their cars from gas to electric. After much studying, he began working on his Escort in the fall of 2008. He finished the project by January 2009. Deptula said he still occasionally uses his Ford Ranger for transporting large and heavy items, but he said he uses the Escort more than 50 percent of the time.

“I drive it every day in the summer and part of the winter,” he said. “I drive it probably three-quarters of the time.” The car goes 40 miles before he has to switch it over to gas, and he said it is very efficient.

“They say they’re like a microwave oven,” he said. “Everything that they do is good and efficient, but they don’t do everything.”

Deptula showcased his car to the students at Birmingham Covington School Friday, Feb. 26, in collaboration with GreeningDetroit.com. He said he got involved with GreeningDetroit.com when he met John Carlos, the company’s executive director of business affairs, at the Southeastern Michigan Power Plant Engineers Society. Deptula showed the car, which was parked outside the front entrance of the school, to two different groups of students during his visit. The students, he said, were very interested in his achievement. 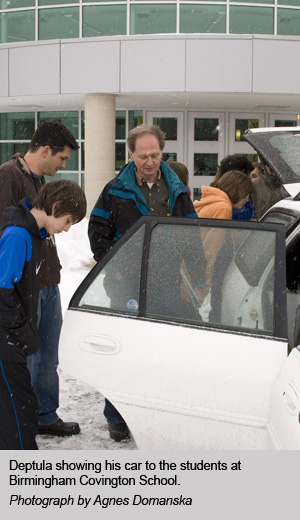 “I thought the experience was very good,” he said. “I was really surprised the kids continually asked me questions. I mean, they didn’t stop.” The students’ positive feedback, he said, underscores their understanding of math and science.

“It shows that they were so involved and excited,” he said. “I guess their background of what [BCS] is teaching in math and science and different things on what’s happening today must have really had a big effect on them.”

Deptula has shown his car not only to students but also to other groups, including Green Fairs and various EAA events.

It’s been just over a year since Deptula completed the transformation of his car, but he said he is looking forward to working on converting yet another vehicle.

“I think I’m going to do the Ranger truck that I have, and maybe make that different somehow,” he said.

He said he is currently doing research on how to convert the truck. He said he hopes he will carry out the process in a different and more improved way.

“I’m probably going to put a generator in there for regenerative braking, and try to charge the battery back up easier,” he said.

Deptula also said he plans to “break the record of 40 miles” on his next vehicle.

“[I’m] always trying to do something to go farther,” he said. “That’s what it’s all about. Everybody asks, ‘how far can you go?’ Even the kids.”