In a time when sustainability and energy efficiency are considered to be key items in moving toward a better future, green leaders around the state are gathering together to work on making that desired future a reality. 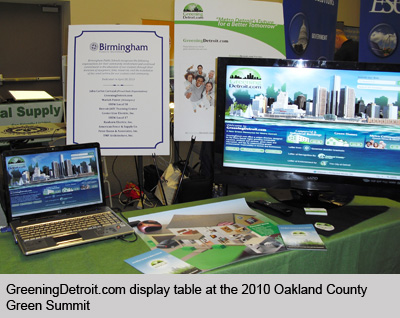 The 2010 Oakland County Green Summit was held May 13 and is one of many conferences that have taken place in Michigan where people from different communities came together and shared one main goal to advance sustainability. The summit attracted more than 130 environmentally conscious individuals, according to Nina Misuraca Ignaczak, the senior planner for the Oakland County Planning and Economic Development Services department.

Ignaczak said she has been working with the county for 10 years and has focused on many different issues during that time period. “I work primarily on environmental issues,” she said. “I’ve focused a lot of my time in the past on watershed issues, water trail planning and green infrastructure planning.” She also said she is currently focusing more on sustainability, energy efficiency and renewables.

The main goal of this year’s summit, according to Ignaczak, was two-fold. The first purpose was to talk about the things Oakland County is currently doing and for County Executive L. Brooks Patterson to issue the OakGreen Challenge, which is an initiative for the community, businesses and local governments to reduce energy consumption by 10 percent in the next two years. The second purpose was to connect the community with resources in order to achieve that goal and to move forward.

At the event, Patterson issued the Oakland County Green Community Excellence Award to the cities of Novi, Wixom and Farmington Hills. In addition, a total of 12 nominees were recognized. Ignaczak said the award was given to local governments who incorporate sustainability into their everyday practices. “We’re honoring local governments who have gone above and beyond,” she said. “They are really leading the charge in the cutting edge of sustainability.”

Ignaczak also said there were a number of other speakers and panelists who presented throughout the day. There were also several green business exhibitors present, including GreeningDetroit.com.

Art Holdsworth, the director of Oakland County Facilities Management, said the summit went very well and was composed of a number of well-informed people. “We’ve got a lot of very knowledgeable people that are sharing a lot of important information with each other,” he said. “And the idea is that they will take all of this information back to their organizations.”

This year’s summit was the second of its kind hosted by Oakland County. The first took place in 2009, and another is expected for next year.