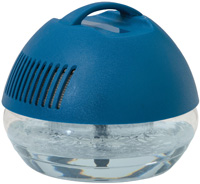 What began as a business trip to Los Angeles for Ortonville resident Ron Stead turned into an inspiration to invent a product unlike any other of its kind. Stead often calls himself “one of the greenest people you know,” and he invented the Aqua Air Cleaner after realizing that if people can use water to clean things like clothes, dishes, countertops and even their bodies, they should be able to clean the air with water as well. And he wanted to do it all naturally.

The Aqua Air is a product that Stead began working on in 2004 after noticing a change in the Los Angeles air when it began to rain after many days of smog. As a person with Chronic Obstructive Pulmonary Disease, Stead found the weather change to be a relief. “One day it rained, and when it rained, it was beautiful,” he said. “And that’s when I had the idea for the Aqua Air. I thought, ‘wouldn’t it be great if we brought nature indoors?’”

Stead described the Aqua Air as a product that cleans the air just as mother nature does: by washing it. The air enters the device through the back side, and then it goes through a patented five-stage water filtration system. He said the Aqua Air removes up to 99 percent of indoor pollutants like dust, smoke, pollen, pet dander, allergens and bacteria, and it does so quietly and efficiently. 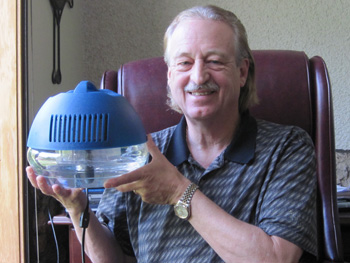 What makes the Aqua Air different from other filtration systems is that it doesn’t pollute the air, according to Stead. He said that although his invention produces negative ions like other ionic generators, it does it naturally so that it doesn’t produce ozone in the process.

Another important aspect of the Aqua Air is that it requires a reusable filter, Stead said. “You rinse it out about once a month, or twice a month depending on the air quality,” he said. “You don’t have to buy new ones, and you don’t throw them in the landfill.” He said the filter is not only environmentally friendly but also economically beneficial because the consumer doesn’t have to spend the money to replace it every few months.

Stead also mentioned that the Aqua Air not only cleans the air but also has the ability to fragrance the air at the same time, replacing the need for aerosol sprays or plug-ins. Available for the Aqua Air is a series of all-natural fragrances that make the home smell fresh without polluting the air. “All that’s in them is citrus, plants and flowers,” Stead said.

Stead noted that his reasons for wanting to be green and to help change the future with his innovative filtration system has much to do with his children. “I want to leave something for my kids and for the future generation,” he said.