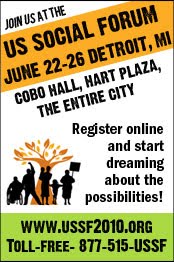 The United States Social Forum has proved to be more than just a conference that has attracted people from all parts of the country to one place. Instead, the USSF that is taking place in Detroit has become a space for individuals to come together to share ideas about solving the current economic and ecological crisis.

Diesel pollution was just one of the numerous topics discussed in the various workshops that are being held throughout the week of the forum. On Wednesday, June 23, the East Michigan Environmental Action Council (EMEAC) gave an informational workshop and discussion at Cobo Hall about the problems that diesel vehicles in Detroit are causing.

According to EMEAC, the solution to diesel pollution is a clear one. According to Associate Director Ahmina Maxey, who headed up the presentation, diesel vehicles can be retrofitted with filters that can reduce their carbon emissions by about 90 percent. 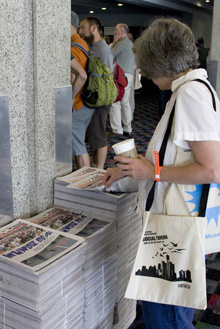 Although the retrofits are expensive, money is available every year from the state and federal governments to pay for these filters, according to Maxey.

EMEAC has asked that the city take action in order to improve the health of Detroiters by doing two main things. First, by enacting an anti-idling ordinance for diesel vehicles. And secondly, by requiring all city municipal vehicles to be equipped with emission control technology.

During the discussion, Maxey noted that solving the problem to diesel pollution is relatively easy when compared to other forms of pollution that will take major steps to solve. Retrofitting these diesel vehicles is just the beginning of a revolution that could greatly improve the city.