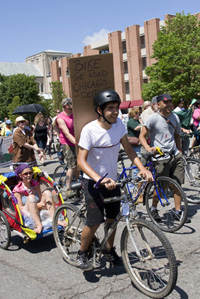 It became apparent at the “BikeIt: Pedal to the USSF” workshop that using a bike as an alternative form of transportation not only prevents environmental harm but also brings people together as a community.

The workshop, which was held Friday, June 25 at Cobo Hall, allowed BikeIt organizers and participants from around the country to share their experiences, achievements and hardships regarding their excursions from different places around the country to Detroit to be a part of the USSF without driving their cars or riding planes.

BikeIt is a temporary, grant-funded organization that was created to be used as a tool for bikers around the country to organize themselves into groups and create bicycle routes to Detroit in order to bring as many people as possible to this year’s USSF by bike.

It’s clear that the purpose of BikeIt is more than one-dimensional. According to the BikeIt Web site, “It is about alternative transportation, it is about organizing ourselves to have a world of clean air, clean water, healthy food and health care, economic and racial justice, and it is about making that statement all together.”

BikeIt’s goal was to bring 20,000 people to the USSF. Participants who shared their stories at the workshop included people from Wisconsin, New York, Illinois, Washington D.C. and Michigan. In addition, bicyclists from Grassroutes Caravan and Spoken Heart were also present.

Many of those who shared said that they were shocked and amazed at how closely they were able to bond with their fellow bikers. Other people even saw a glimpse of the future as a current reality. “What was amazing to me on the experience of biking from Ithaca to Detroit was that we operated as if ‘Another World is Possible’ and already existed,” said one of the bikers at the workshop.