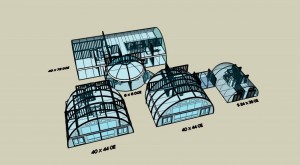 While it may be true that no one person can change the world entirely alone, Adam Bearup sure is making a difference in Michigan.

Bearup is an accomplished emcee and speaker who is best known as the sustainable builder and professional who recently decided to take on the task of creating the world’s largest earth shelter.

Earth Shelter Project Michigan is an internet video series that follows Bearup and crew as they work to complete the construction of the 12,000-sq. foot compound in Northern Michigan. When finished, the shelter will have five domes and consist of a main house, a green house, guest quarters, a large barn and connecting units, according to EarthSheltered.org.

As excited as Bearup seems to be about the project, he said the opportunity came to him at a very busy time in his life. When he was approached to do the job, he turned it down four times before finally accepting. He originally declined it because Hybrid Homes, the company he has owned for the last seven years, was keeping him busy enough.

Despite his numerous job titles that seem to keep him more than a little preoccupied, it appears that he loves what he does. “For me, building sustainably and consulting with those looking to build sustainably is my passion,” he said. “I get up each day and love the fact that I do what I do. It has opened so many doors for me in my career.”

Even though Bearup’s ongoing project seems to be something that is making him well known, he’s not just focusing on one accomplishment during his time as a builder. “Most people live for that one moment in their life when they got a home run, or did something special,” he said. “I want to be remembered for not one moment, but rather an entire career.”

Bearup’s previous achievements prove that he is a pioneer in sustainable building. Among many others, some of his accomplishments include: building the first Leadership in Energy and Environmental Design (LEED) Platinum log home in America, building Michigan’s first homeowner-funded LEED Platinum home, completing North America’s Top ICF Project and building Michigan’s most energy efficient home ever tested.

Earth Shelter Project Michigan is expected to be complete by the spring of 2011. Visit www.AdamBearup.com to watch the weekly project videos.