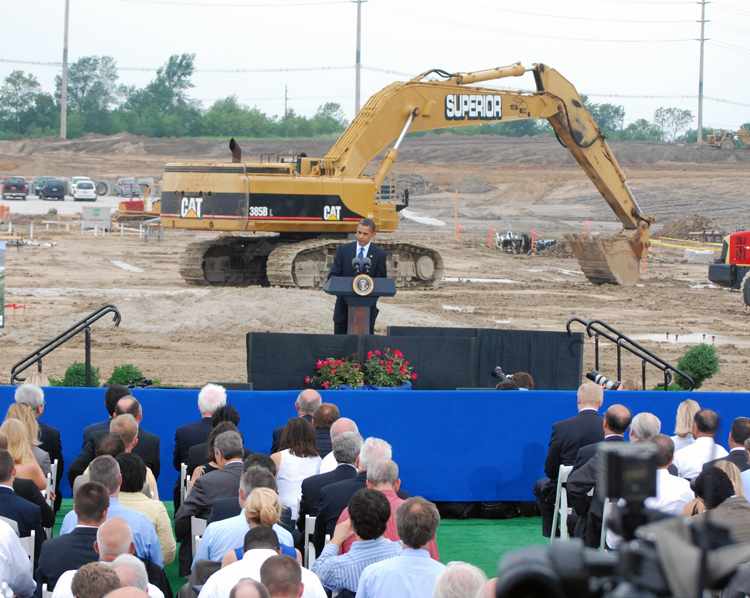 The Compact Power plant is the ninth of nine new advanced battery factories to start construction as a result of the $2.4 billion in Recovery Act advanced battery and electric vehicle awards President Obama announced last August.  Before the Recovery Act, there were no domestic factories doing high-volume manufacturing of batteries for electric vehicles, but due to Recovery Act investments like this one, the U.S. will have the capacity to produce up (from 5%) to 40 percent of the world’s batteries by 2015.

The $151 million Recovery Act grant awarded to Compact Power last August has been matched dollar-for-dollar by the company.  As a result of this public-private partnership, this project will support hundreds of jobs in Holland, Michigan.  By the day of groundbreaking, Compact Power, Inc. a subsidiary of LG Chem Ltd., estimates it will have already created or saved about 70 construction jobs – and is on-track for 200 by September 2010 and 300 at the peak of construction.  According to a company spokesperson, once the facility reaches full scale operation in 2013, it will then employ 300 Michigan workers, including operators, engineers, and administrative staff, in permanent positions at the site.

When fully operational in 2013, the Compact Power, Inc. factory will produce battery cells to support 53,000 Chevy Volts a year. Ford also announced yesterday that batteries for its new electric Ford Focus will also be supplied by Compact Power’s Holland, Michigan plant once it is operational.

After the speech, the President went into a tent to take a look at a pair of electric cars and pose for photos with Gov. Jennifer Granholm and Mayor Kurt Dykstra.

Building STAR: What it is and Why it Matters Local Nonprofit Recycles ‘Treasures’