Big Crowd In Macomb Looks At ‘All Things Green’

Interest in clean green power and energy efficiency is only growing in Macomb County, based on Wednesday’s Macomb County Chamber “All Things Green” 2011 conference.

It’s the fourth year for the conference, which attracted 180 signups and offered displays of everything from electric cars to LED lighting from more than two dozen exhibitors.

Since this is Detroit, it’s appropriate that several electric and hybrid cars were stars of the event. Included were the Chevrolet Volt, electric and hybrid trucks from Oak Park-based Azure Dynamics, and a hydraulic hybrid garbage truck from Bosch Rexroth Corp.

Daniel Frakes, manager of vehicle, fuels and energy policy at General Motors, kicked off the event with a 50,000-foot overview of the world’s energy situation. He said that while only 35 percnet of the world’s energy comes from petroleum, 90 percent of transportation is fueled by oil — which presents a need for energy diversity.

Mike Byers, director of fleet sales at Azure Dynamics, described his company’s Balance hybrid and ForceDrive electric drivetrains, which are going into operation for taxi fleets and delivery companies.

And Justin Sutton, founder and managing partner of Interstate Traveler Co. LLC, offered a look at a visionary new solar-powered rail system for highway rights-of-way — a system that has found support in Macomb County.

When it comes to EVs, Irwin said, watch out, they’re actually coming — the Chevy Volt and the Nissan Leaf are here, and the Ford Focus Electric, Transit Connect Electric, Smart EV, Tesla Roadster are coming soon.

Next up was Kristin Zimmerman, project manager for GM on the Volt. She described how she’s working with both consumers and utilities to introduce the Volt and the grid.

So far the car is wildly popular, she said. “Demand is far outstripping the supply,” she said. “We want to keep it that way.” She said people are now driving Volts in 35 states.

In Michigan, she’s working with a Michigan Public Service Commission plug-in electric vehicle tax force on a variety of initiatives, including a new Web site, www.pluginmichigan.org.

She’s encouraged that many businesses, including Meijer stores, are installing free EV charigng stations. She called it the “Meijer model,” and said retailers and other businesses “have figured out, it brings in customers. It helps with their sustainability efforts. And if it costs a buck fifty to completely recharge a Volt battery, don’t worry about billing for it.”

Zimmerman said she’s also working with utilities to figure out how the Volt will affect the grid. In 110-volt charging mode it draws about as much power as a hair dryer — but for eight hours.

Next up was Haukur “Hawk” Asgeirsson, manager of power systems technologies at DTE Energy, who was reassuring about the effect of EVs on the electric grid — saying they’re not likely to present any capacity problems at all, as long as they’re charged at night. He also described DTE’s SolarCurrents program that can pay electric customers to have DTE solar panels installed on their roofs.

Ending the EV panel was assistant training director of the International Brotherhood of Electrical Workers-National Electrical Contractors Association Electrical Industry Training Center that hosted Wednesday’s event. He described the industry’s increasing efforts at training electricians in installing sustainable technologies — but emphasized that most of what they need to know is simple, basic electrician training that’s been around 100 years or more.

An afternoon panel, “Greening in Action: Best Practices From the Field,” checked in with four companies in a variety of industries on how they became greener. Karen Reaume, management systems coordinator at Monroe’s Spartan Steel Coating, described her company’s efforts in everything from waste reduction to the pH of wastewater.

Mark O’Brien, general manager of Roy O’Brien Ford, described his family’s auto dealership efforts at going green, which include solar lighting and geothermal heat. He said that since so many Ford dealerships in the Detroit area sell vehicles at fixed price to employees, retirees, family and friends, going green was one way for O’Brien Ford to differentiate itself.

Bill Gambill, environmental services and grant coordinator for the city of Warren, talked over a few of the city’s green initiatives, including a green  roof project that also trained 16 displaced workers on green roof installation techniques. He said the city has a stated goal of a 20 percent reduction in energy use in city-owned buildings. 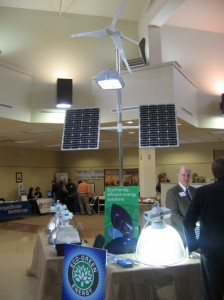 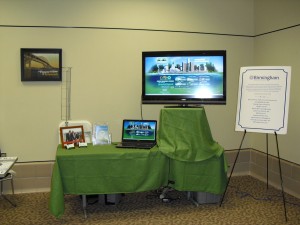