Is High-Speed Passenger Rail on the Right Track?

In the early part of the 20th century you could go from Chicago to Milwaukee, a distance of about 85 miles in close to 2 hours (including stops) – as long as you rode on a high-speed electric interurban “trolley”.

Were you to do it in a motorcar, on barely-paved roads, it might take you as much as half a day – assuming you had no breakdowns and had access to the few gas stations that existed at the time.

Today, on Amtrak, it’s down to about an hour and a half – and about the same time if you drive… assuming there’s not that much traffic and no construction delays.

In Japan, it would take you about half as long.

In France, even less.

Why does it still take the same time to go on steel rails from Chicago to Milwaukee today as it did nearly 100 years ago?

That’s a good question. One that has a number of answers, most tied closely to money and politics.

But, with gasoline costing more than $4 a gallon (especially in Chicago) and airlines charging passengers extra for everything except using the bathroom (and they tried doing that on Ryan Air), not to mention the hassle of having to get to the airport so darn early and then having to go through airport security, it’s a question being asked a great deal by travelers.

In the early 1950s it took the vision of President Eisenhower, nearly $500 billion (in current dollars) and 35 years to build to Interstate highway system – and it seems in a lot of places to be in a constant state of repair.

The current administration, spurred on by a former Amtrak commuter named Joe Biden, has authorized a little over $10 billion (in current dollars) on a project called the High Speed Intercity Passenger Rail Program (HSIPR) to build the infrastructure that will allow travelers to journey on trains in safety and comfort at speeds of up to 200 mph.

According to Robert Kulat, a public affairs specialist with the U.S. Department of Transportation (DOT), “A fully-developed passenger rail system will complement our highway, aviation and public transit assets. Investment in high-speed rail will serve as a catalyst to promote economic recovery, help build lasting transportation infrastructure, and rebalance our transportation network.”

Kulat also points out, “Transportation accounts for a significant amount of our nation’s fuel consumption and is a major contributor of greenhouse gas emissions. Advancing high-speed rail is one of many steps DOT is taking to reduce energy consumption and combat climate change while delivering safe and efficient transportation options for all Americans. These activities will help to revitalize industrial manufacturing in the U.S., while satisfying the need for new passenger rail equipment and infrastructure.” 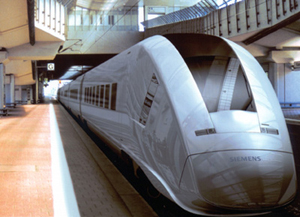 Getting everything done to make 200 mph trains possible will take time – but the initial improvements to existing rail lines should allow speeds of 110 mph in a much shorter period – in some cases a year or two.

There are trains that do better than that now – Amtrak’s Acela can zip along at 150 mph for short stretches, but on average runs at less than half that. The Acela route goes from Boston to Washington (it’s what Senator Joe Biden commuted on from his home station in Rhode Island to his job in Washington before becoming Vice President.) It’s a part of what the DOT calls its Northeast corridor. Conveniently enough, it’s the most heavily funded route structure is the U.S. as well as the most traveled.

In the Midwest, once home to a steel net of railroads that was so extensive it was not unusual for a small town like Ionia, Mich. to have two rail companies serving it, neither the funding, nor the usage, is on  par with the Northeast.

“Unfortunately, we are two generations away from the mindset [of regular train usage],” says Dave McLaughlin, an executive in charge of transportation products for American Seating, a 125-year-old Grand Rapids, Mich.-based manufacturer that supports the bottoms of sports fans in Yankee Stadium, college students in lecture halls and bus and rapid transit riders across the country. “It’s probably going to take us at least one to get us back to where we started,” McLaughlin thinks.

The initial federal funding for HSIPR includes a caveat: a Buy American clause. While the current crop of high-speed passenger rail on the other sides of the Atlantic and Pacific benefit from years of experience in operating their trains, they also benefit from the experience of designing and building them. Many American manufacturers will have some heavy catch-up work to do to be able to satisfy the need for both new passenger cars as well as new engines.

Others, such as American Seating and Siemens are already in the mix. Siemens currently manufactures light rail, commuter rail and intercity passenger engines and rail cars – and recently received a $466 million contract from Amtrak to build 70 new locomotives for that Northeast corridor, the first of which will be delivered in 2013.

The Siemens contract will add 250 new “green manufacturing” jobs in three states. According to the DOT, this will then have a multiplier effect of adding an additional 625 jobs to the local economy.

That’s just one contract, for one area. The $10 billion will be spread around so that in the Midwest, West and in between, stations will be improved or built, separate passenger rail lines will be built (currently, many passenger trains travel over tracks built and operated by freight lines) and additional engines and coaches will be built.

But if they build it will passengers come? Perhaps McLaughlin is too pessimistic. Even today, at less than stellar speeds, Amtrak ridership in May of 2011 was up nearly 7 percent across the country, not just in its already-heavily-traveled Northeast corridor. That represented a one-month total of more than 2.6 million passengers. The line from Chicago to Port Huron, Mich. added 22 percent more riders over 2010 while on the run from Kansas City to St. Louis ridership increased nearly 30 percent. Those are numbers to be noticed.

Proponents of the HSIPR project point out that it’s “investment” spending – just as Eisenhower invested in a national highway system. While some state governors have declined the investment in their states, a huge majority of mayors across the country welcome it.

A recent survey conducted by the U.S. Conference of Mayors points out that “transportation infrastructure spending is greater when it is invested where economic growth will occur, which is in metropolitan areas,” according to Atlanta’s mayor Kasim Reed. And the high-speed rail project includes “Intercity” in its title for just that reason.

An interesting result from the survey indicated that 65 percent of the mayors support an increase in the federal gas tax – if a greater share of it went to public transit. Without that proviso, only 7 percent indicated support for a gas tax increase.

It’s obvious that the $10.1 billion that’s scheduled to be invested in high (or even just plain higher than currently) speed intercity passenger rail is a beginning. Additional funding will be required. Whether it’s an increase in the gas tax as the mayors suggest, a head-to-head competitive price comparison as Amtrak suggests in the accompanying graphic, or some other mechanism such as public-private partnerships, moving a great number of people from place to place quickly, relatively inexpensively and “greenly” will be a necessity in the coming decades.

It’s an opportunity for American manufacturing and for thousands of American workers.