The Quantum, which is street legal, will cruise along mostly two-lane roads at an expected average of 40-50 mph (past Michigan solar cars can break 100 mph, but the team doesn’t test for speed until after October’s World Solar Challenge). Five stops in St. Joseph, Ludington, Traverse City, Mackinaw City and Tawas City will simulate the mandatory control stops along the Australian race route.

At the check points, the team will rest, change drivers and charge up. For details about the dates and times the team will be at each stop, check the website at http://solarcar.engin.umich.edu/news.

“Mock race is a major milestone for us,” said Rachel Kramer, project manager and senior neuroscience student. “We’ll be on the open roads navigating and dealing with other traffic while making real-time race strategy decisions.”

Beyond practice, the trip will give the team a chance to show Quantum off across the state that many of its biggest fans and supporters call home. The team has more than 300 sponsors including Pure Michigan, which will provide giveaways that available along the route, and several Michigan businesses.

“Quantum is a breakthrough car for the U-M team and we couldn’t have built it without our sponsors,” said Chris Hilger, business manager and junior chemical engineering student. “This year we worked with the automotive base around us in unprecedented ways. No team has collaborated with industry on the level that we have.”

In 2009, Michigan-based engineering firm Roush painted the car and donated some machining time and materials. This year, the students built Quantum’s carbon fiber chassis and body right at Roush’s office, getting advice from professional engineers as they worked.

“With their help, we took a process that used to take a month and finished it in a week, and we ended up with a better product,” Hilger said.

The team worked with the Detroit office of British engineering firm Ricardo to measure the true forces the car experiences on the road. With this new knowledge, the students were able to design a streamlined car that’s 200 pounds lighter than its predecessor. 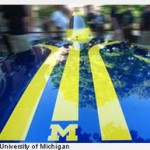