Through a smoldering brush fire, past wind-shearing road trains, across the Australian continent, the University of Michigan’s Quantum was the first American car to finish the World Solar Challenge Thursday. The Solar Car team placed third overall in the international competition.

No other U.S. team has had back-to-back top-three World Solar Challenge finishes.

After driving for 35 hours and 33 minutes over five days, the M team crossed the end-of-timing line in Angle Vale, South Australia at 3:55 p.m. race time (2:25 a.m. U.S. ET). They are spending the night there. In the morning they will drive the remaining 20 miles to the ceremonial finish line in Adelaide’s Victoria Square.

“It was an incredibly close race, especially due to the unexpected elements such as the brush fire which delayed the race, dust storms, major cloud cover at the end of the race, and the ultra reliable cars of Nuon and Tokai,” said Chris Hilger, the team’s business director.

On the second day, officials stopped the race because of a brush fire. All three teams had a unique mid-race opportunity to fully charge th 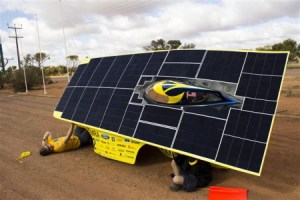 eir batteries. And when they hit the road again on day 3, brush was still smoking on the side of the road. Clouds and rain were forecasted, and the team drove conservatively to prepare for it, Kumar said. But Tokai didn’t. They extended their lead.

“At the beginning of the fourth day, we launched a counter attack, hurtling down the Stuart Highway at 64 mph attempting to reel Tokai in,” Kumar said.

The team was just three minutes from overtaking the second place Nuon when a strong gust of wind ripped the right wheel fairing from the chassis. The students made roadside repairs while the other two teams pulled ahead. By the time they were back on the Stuart Highway, though, Michigan was 30 minutes behind the leading teams.

En route to the next control stop, “bad luck hit Quantum again with just the wrong combination of cross winds and road train wakes to pull the (fairing) off a second time,” race manager Rachel Kramer wrote in a guest blog post on Life @ Michigan.

A road train is a long tractor-trailer, and in this year’s race, teams had to contend with several carrying wide loads.

“We never gave up the chase,” Kumar said.

The team “crawled” across the finish, according to their final race tweet. They had emptied their battery trying.

“We’re really proud,” said Caitlin Sadler, the team’s head of public relations. “We built a great car. They raced an amazing race and they’ve really held up the tradition.”

UM placed third in the World Solar Challenge in 2009 as well. This is the fifth time in the race’s 20-year history that the UM team has placed third. Reigning national champions, the team has finished first in the North American Solar Challenge three times in a row and six times total.

During the past two years of intense preparation, the team shaved 200 pounds off its 2009 car by weighing the vehicle bolt by bolt and streamlining nearly every part. They improved its aerodynamics by an estimated 30 percent. They tested in practice races across Michigan and in Australia. And they strategized with computer scientists and sailboat racers to come up with more accurate weather forecasting models.

With more than 100 students from schools and colleges across the university, the Solar Car Team is one of the largest student organizations on campus.