‘It’s not that easy being green,” sang Kermit the Frog. While that’s often true when it comes to green building, it is definitely getting easier, say Lynn and Charlie Arnett of Grosse Pointe Park.

The Arnetts and their four children, three of whom still live at home, recently moved into one of the Detroit area’s first new LEED (L

The family had been living in a nearby 1950s house and needed more space. They thought seriously about building, but empty lots are hard to find in older, established neighborhoods such as Grosse Pointe, and they weren’t sure they wanted to trade in the frustrations of an older house (asbestos, lead paint, wet basements) for the different but equally challenging issues of newer ones (formaldehyde, medium-density fiberboard).Both have long been interested in environmental issues. Lynn worked in environmental law in Washington, D.C., and Charlie, a teacher, jokes that he recently found a button for the first Earth Day in a box when they moved.

ght and plenty of research, they decided to look for a lot where they could build an environmentally conscious new home. Ultimately, that search led them to a 60-by-175-foot corner lot where a condemned 1920s Tudor had been torn down.“We decided we wanted to walk the walk, not just talk the talk,” says Charlie of their decision to build. Doing so had its challenges. Green building has been in the forefront of the news, but mainly in the commercial arena. Green residential building is still fairly uncharted territory, say the Arnetts, especially in Michigan. Still, they were determined to make it happen.

Once they found their lot, they enlisted the help of Joel Peterson of Insignia Homes, a Grand Rapids-based builder whom Lynn had worked with on a former house and who had experience in LEED-certified homes. He led them to Wayne Visbeen, a Grand Rapids-based architect known for designs that successfully blend past and present.

The Arnetts wanted the house to be green but also to blend with the older Tudors and colonials on the block. “It was very important to us that the house fit into the neighborhood,” Charlie says. “We had the architect and builder do a Grosse Pointe field trip before we started.”Priorities included a vintage-style screened porch off the kitchen as well as a large open living space encompassing the kitchen and great room. The house would have six bedrooms and 41/2 baths and the kind of detail — wood trim, glass-knobbed doors, a stucco fireplace, exterior shingles — often found in older homes. Underneath, however, the infrastructure would be green.

LEED-certified houses include things such as geothermal heat, an air recovery system and a long list of environmentally approved materials, including insulation, windows, carpet, even landscaping. “Indoor air quality is very important to us, so we opted for no-VOC paints or finishes, and insulation made of shredded newspapers,” Lynn says. LEED certification is awarded in levels, with points given for each area of compliance. (For more information, visit the U.S. Green Building Council’s website at www.usgbc.org.) The Arnetts are waiting to hear if they have achieved platinum status, the highest level given, and have been investigating the idea of installing cutting-edge solar shingles, a product Dow is pioneering.

Lynn spent hours researching materials and contractors. They struggled to find cabinetry for the kitchen that was formaldehyde-free, ending up with an Indiana company. “You really have to ask a lot of questions,” she says. “It was a big education for us, too.”It took less than a year to build the Craftsman-influenced home. Now that the house is done, they’ve been working with Grosse Pointe Park-based interior designer Fatima Beacham and trying to fill it with “green” furniture — another area that hasn’t quite hit the mainstream yet. 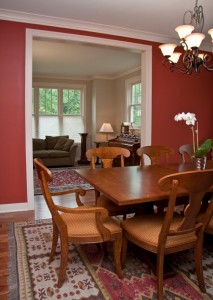 problem with a lot of new furniture is that it is built with medium-density fiberboard that contains formaldehyde,” Lynn says. Formaldehyde has been linked to many health ailments. They admit there were times they were tempted to give in and take the easier way. “Staying on track and not letting ourselves be pressured to compromise was challenging,” Charlie says.“There were times I was tempted to cave, but Lynn kept me going.”

While building green is a bit more expensive than standard construction, tax credits and governmental rebates help, and prices should decrease as demand goes up, the Arnetts say. For their family, going green has been the right choice. “Once you get started, you want to do it 100 percent,” Lynn says.“When it comes to residential construction, LEED is still in its beginning stages. We’d love to be a resource for other homeowners. Hopefully our experience will make it easier for the next folks who want to do this. Even choosing a low or no-VOC paint for your next project is a good start.

”The Arnetts recommend the following contractors and manufacturers: 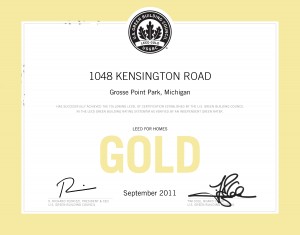 Click here to be introduced to Alliance for Environmental Sustainability