A Cambridge, Mass.-based architect devotes two years of his life to develop Compleat, a disposable coffee cup that doesn’t require a plastic lid. Seasoned takeaway coffee drinkers, what do you think? 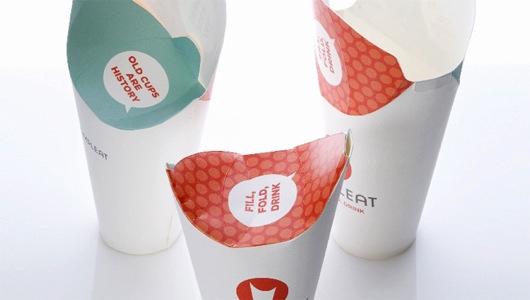 Although architect Peter Herman’s Compleat, a lid-less disposable coffee cup design concept, doesn’t have much to do with at-home caffeine intake (if you’re using throwaway coffee cups at home instead of mugs or other reusable containers, than I don’t know what to tell you), it’s still a nifty idea for on-the-go coffee guzzlers who’ve always wanted to do away with the wasteful-yet-necessary petroleum-based lids but aren’t keen on the idea of scalding hot liquids splashing everywhere.

As you can see from the above image, Compleat is a paper cup with dual flaps at the top that fold up like a Chinese food takeaway box to form a spill-resistant sipping spout — no plastic lid-age necessary. Like other disposable coffee cups, the paper will be coated with a waterproofing agent but ideally with a cellulose-based one so that the cup can be composted.
Herman has teamed up with graphic design firm Proverb to place branding messages on the cup’s surfaces and is currently in talks with retailers and manufacturers to take his design (it took him two years and hundreds of prototype designs to develop) to the next level. Herman believes that Compleat has the potential to save retailers a nice chunk of change since they’d be purchasing just the cups, not cup and separate lids, from a single supplier.
Even though I grew up in a place where there’s a Starbucks on every other block, I’m not much of a coffee drinker myself and not entirely familiar with the intricacies of takeaway coffee consumption, so we’d love to hear what you think.