When West Bloomfield resident Mary Akers learned that her boyfriend, Cpl. Jay Martin, was being deployed to Afghanistan, she was prepared for some big life changes. The couple, who were expecting their first child, made plans for the future, but acknowledged that difficult challenges likely lay ahead. Still, Akers looked forward to the day when Martin would return home. She recalls being thankful that his deployment would be over before the birth of their daughter.

Over the course of Martin’s deployment, Akers’ concerns shifted. She worried less about being pregnant while her significant other was over-seas and more about the changes she perceived to be taking place. When he returned, her fears were confirmed. She explains, “He left here a very laid-back and trusting guy. He was social and enjoyed being with friends and meeting new people. The man who came home was not the same; I don’t feel like ‘my Jay’ ever really returned from Afghanistan.” In the weeks following Martin’s return, Akers was so alarmed by his paranoid statements, anxiety attacks and violent outbursts that she ended their relationship. “He refused to acknowledge that he was struggling. He believes in his mind that he hasn’t changed at all. I made the hard choice that I felt was necessary to protect myself and my infant daughter,” she says.

Although Martin has refused to seek professional help, Akers is certain that his symptoms are due to Post Traumatic Stress Disorder. According to the U.S. Department of Veteran’s Affairs, current research indicates that 10-18% of Veterans of Operation Enduring Freedom and Operation Iraqi Freedom are likely to have PTSD upon returning from deployment. The disorder is expressed through a range of symptoms including anxiety, irritability, paranoia, withdrawal, memory problems, flashbacks and nightmares. The Dept. also notes that other mental health problems, such as depression, anger, difficulty managing conflict and the excessive use of tobacco and alcohol are commonly found in Veterans returning from combat situations.

It’s clear that finding an effective way to help our servicemen and women process and heal from their experiences with war is of paramount importance, but traditional talk therapy may not be enough. According to the Veterans Yoga Project, “Veterans with PTSD who practice yoga report better sleep, improved ability to focus and concentrate, less anger and irritability, a more general positive outlook on life and an overall greater ability to enjoy life in the present moment. It has been found to be especially helpful for those Veterans who are also participating in evidence-based psychotherapy for PTSD.”

These findings have been upheld by a study commissioned by the Department of Defense and carried out under the direction of Sat Bir S. Khalsa, Ph.D., an assistant professor of medicine at Brigham and Women’s Hospital and Harvard Medical School. The study looked at a small sample of veterans who had been diagnosed with post-traumatic stress disorder. Results showed that after ten weeks of yoga classes, including meditation and breathing, done twice a week, and fifteen minutes of daily home-based practice, symptoms of PTSD had been reduced.

To explain the results, Khalsa says, “PTSD is a disorder involving dysregulation of the stress response system, and one of the most powerful effects of yoga is to work on cognitive and physiological stress.” He goes to clarify, saying, “What we believe is happening, is that through the control of attention on a target — the breath, the postures, the body — that kind of awareness generates changes in the brain, in the limbic system, and these changes in thinking focus more in the moment, less in the past, and it quiets down the anxiety-provoking chatter going on in the head. People become less reactive and the hormone-related stress cycle starts to calm down.”

Michael Wisner, a member of VA 147 Attack Squadron, lived through the stress of combat while deployed to Vietnam in 1968 and 1969. It wasn’t until the late 90’s that Wisner was introduced to yoga, but it impacted his life so profoundly that he eventually took the training and became a yoga teacher. “It will calm your troubled mind, give you peace and allow your limbs to be supple so you not only feel like dancing but probably can,” states Wisner, adding, “Although yoga is not a religion, there is a spiritual aspect to the idea of being present, breathing and connecting to a larger Source.” When asked his personal thoughts on yoga and PTSD, Wisner doesn’t mince his 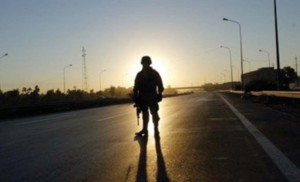 words. “Yoga does help with PTSD,” he states, clearly.

To help veterans explore the healing possibilities of yoga, Paul Zipes, a former Navy deep sea diver, founded Yoga For Vets, a non-profit organization dedicated to welcoming veterans home from combat and helping them connect with local yoga studios. The YogaForVets.org website lists studios and teachers throughout the United States who have committed to offering war veterans the option of trying four or more yoga classes at no charge. Zipes is proud that so many studios from around the country have signed on to help Yoga For Vets meet their goal of allowing veterans to see the benefits of yoga and he hopes the organization will be able to fund scholarships for workshops and teacher trainings in the future.

Sue Lynch, JD, RYT served in the Army Reserves for 22 years and struggled with PTSD after serving in Operation Desert Shield and Operation Desert Storm. She says, “After returning from Saudi Arabia, I experienced symptoms of PTSD that were debilitating. After 9 years of therapy, I understood how PTSD affected me; I could see the emotional storm approaching but was unable to stop the destruction the storm caused, until I found my yoga mat 9 years later. I was overwhelmed by the discovery that, through my yoga practice, I could manage PTSD symptoms. Therapy helped me understand the emotional storm, and yoga gave me the tools to manage the storm so that I could integrate my war experience into my life at home.” Like Wisner, Lynch was motivated by the healing power of yoga; she pursued teacher training, opened a yoga studio and has established a yoga and meditation based reintegration program for veterans.

Mary Akers is still waiting, and praying, for Cpl. Martin to acknowledge and recover from his PTSD symptoms. “Whatever it takes, I hope that he finds healing and comfort, and that he is able to reclaim his life. I do think that he’ll eventually be able to get a better footing in life and make a success of himself,” she says, in a tone that combines optimism with a touch sadness. In the meantime, Akers says she is glad to know that, for many veterans, an act as simple as rolling out a yoga mat can be the first step towards healing the mind and reclaiming the spirit.

To learn more about Yoga For Vets, and to find participating studios, visit YogaForVets.org. Additional information about the effects of yoga on PTSD can be found at VeteransYogaProject.org.