Lake Winds Energy Park to be Operational by November

Consumer Energy expects the 56 turbines that make up the Lake Winds Energy Park to start producing electricity in November.

Construction at the project in Riverton and Summit Townships is mostly finished. However before full scale operation workers still need to test many of the turbines before letting the wind turn them freely.

The scene along U.S. 31 in Mason County looks drastically different than at the same time last year. The 56 turbines dot portions of the horizon. No longer are silos the dominate structures that tower over fields of corn and beans.

Dennis Marvin with Consumers Energy say when fully operational, Lake Winds will supply a significant amount of electricity, “roughly enough power for 25 homes.” Marvin expects the turbines will all be turning freely in November.

Land owners with turbines on their property received a one time $10,000 payment and will receive additional payments annually.

Consumers Energy dealt with strong opposition from some area residents and outside groups. Both questioned the scale of the project and setback distances from homes and roads.

Evelyn Bergaila of Riverton Township wanted the turbines to be no closer than a mile-and-a-half from where homes are located, “to help get rid of the problems that they cause.”

However, Ron Pedersen says he doesn’t mind the towers that surround the three acres he owns, “They are awesome, they are majestic looking.” Thursday Pedersen watched crews test blades on one tower that could be seen from his garage window.

State regulation will soon require Consumers Energy to get 10 percent of its energy from renewable sources. Lake Winds will help the company get closer to that mandate.

In 2015 Consumers Energy will open an even larger wind farm in Tuscola County. 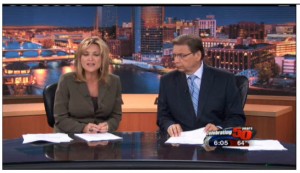 USA: Are natural Gas and Liveralized Energy Markets Challenging Nuclear’s Future? How Green is Your Faith?