How to Buy the Right Wood Stove or Insert

When you go shopping for a wood stove you will have two main sources of information to help with your decision. First is the manufacturer’s literature that gives performance specifications, and second is the advice you receive from the various stove dealers you visit.

Speaking of dealers, you might think a dealer just wants as much of your money as possible, and there is some truth to that of course, but the reality is more complex. The experienced dealer wants you to be so happy with your purchase that you will tell your friends so they will buy too. That means the good dealer will make every effort to meet your objectives with the right stove because no dealer wants you to come back complaining that the stove is too big, too small, or otherwise unsuitable. A good dealer can be your most valuable resource.

The two main material options are cast iron or welded steel. There is no heating performance difference between them so the decision has to do with aesthetics and price. Graceful curves and artistic relief patterns make cast iron stoves pleasing to the eye. You’ll pay a premium price, though, and cast stoves do need to be rebuilt every few years to seal the joints between panels so that air leakage will not allow the fire to burn out of control. Welded steel stoves are plainer, but cost much less.

In terms of durability, there is not much difference these days. Cast stoves used to have the edge because any part that failed from heat 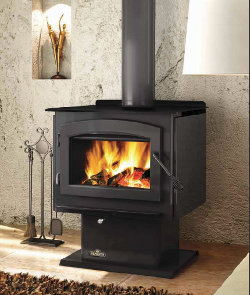 stress could be replaced. But now, having learned their lessons, the reputable steel stove makers have designed their products so that the highly stressed internal parts are replaceable. This is one area to watch out for when shopping.

A few premium stoves are built with soapstone panels in their sides, back and top. The manufacturers of soapstone stoves promote them on the basis that they hold heat for many hours so they level out the inevitable ups and downs in wood stove output. There is some truth to this, of course, but these stoves are also slow to heat up so there is a price to be paid for the heat that they store. Roughly the same effect can be created by building mass into the installation in the form of a stone or brick wall covering and hearth pad. The fact that a stove is built using soapstone is not necessarily a good reason to buy it, unless it also has the other features you want and you really like the way it looks.

The debate over catalytic versus non-catalytic combustion has been ongoing for over twenty years. Both approaches have proved effective, but there are performance differences. Catalytic combustion, in which smoky exhaust gases are passed through a catalyst-coated ceramic honeycomb buried deep inside the stove where they ignite and burn, tends to produce a long steady heat output. All catalytic stoves have a lever-operated catalyst bypass damper which is opened for starting and loading, and this tends to make the operation of these stoves a little more complicated. The catalytic element degrades over time and must be replaced, but its durability is largely in the hands of the stove user. With careful use, the catalyst can last more than six seasons, but if the stove is over-fired, trash is burned and maintenance is non-existent, the catalyst may fail in as little as two years.

As its name implies, non-catalytic combustion does not use a catalyst, but instead creates a good environment for combustion right in the firebox. Three key features create this environment: firebox insulation, a baffle to divert gas flow and pre-heated combustion air introduced through small holes all around the upper part of the firebox. ‘Non-cats’ tend to produce a somewhat peakier heat output curve, but are prized by their users for the arrestingly beautiful fire they create. Good conditions for combustion include high temperatures, so the baffle and some other internal parts will need replacement from time to time as they deteriorate with the heat.

So, which is the better stove, a cat or a non-cat? It would appear that the market is slowly turning in favor of non-cats as some manufacturers have actually switched in that direction, but still, some of the most popular high-end stoves continue to use catalytic combustion. Both options have their benefits and limitations, as well as legions of loyal users who swear that their (cat or non-cat) is far better than those silly (cats or non-cats). And both burn up to 90 percent cleaner than older conventional stoves.

Back in the late 1980s the U.S. EPA established a mandatory smoke emission limit for catalytic wood stoves of 4.1 grams of smoke per hour and for non-cat stoves of 7.5 g/h. The difference in limits is to recognize that cats work great when new (as they are when tested) but the catalytic element degrades with use so by the time the catalyst is due for replacement, emissions are a lot higher than 7.5 g/h. Non-cat performance doesn’t tend to degrade as much with use. As a result, you can assume that there is no real difference in the average smoke emissions of cats or non-cats.

Today, all wood stoves and fireplace inserts (and some factory-built fireplaces) sold in the U.S. must meet these limits*, and many are certified for emissions down in the 1 to 4 g/h range. The EPA certified emission rate is a reliable number that can be compared from one model to the next. Mind you, a one or two gram per hour difference in smoke emissions is not relevant to the user in the real world of every day home heating.

Click here to be introduced to Rockford Chimney Supply