“Detroit, Michigan” showcases Kid Rock’s pride in the city, and Pure Michigan wants to hear from its fans about the places they go and things they do to get their “Detroit Pride” pumping. Pure Michigan will choose one winner, at random, from the entries submitted to the comments section on the Pure Michigan Connect contest blog post.

The winner will be announced Friday, November 9 at 2:00 p.m. EST and will receive a $100 gift certificate for the Pure Michigan store on michigan.org.  Fans must include an email address to be eligible to win and the deadline for submitting entries is 12:00 (noon) EST on
November 9.

“We are thrilled to be partnering with Kid Rock again to offer his fans and the fans of Pure Michigan the chance to preview “Detroit, Michigan,” exclusively on michigan.org,” said George Zimmermann, Vice President of Travel Michigan, part of the Michigan Economic Development Corporation.  “Kid Rock is a long-time champion for Michigan – through his lyrics, as in the case of “Detroit, Michigan,” and through philanthropic efforts including his work to establish the Kid Rock Foundation and the Made in Detroit Endowed Scholarship.”

Kid Rock recently joined forces with Quicken Loans as part of the Opportunity: Made in Detroitcampaign.  He has also worked with the Detroit Symphony Orchestra and established the Kid Rock Foundation and Made in Detroit Endowed Scholarship through Wayne State University.

As an entrepreneur, Kid Rock opened the American BadAss Beer Company in Michigan in July 2009, and refueled and became the face of the Made in Detroit brand and clothing line.

As one of the country’s most ardent supporters of the United States military, Kid Rock regularly visits service members stationed across the world and works closely with Operation Homefront, the USO and Operation Happy Note. 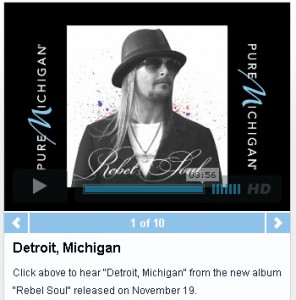