The recent issue of Renewable Energy World is available to view.

Issue:  Why Solar Must Keep Innovating 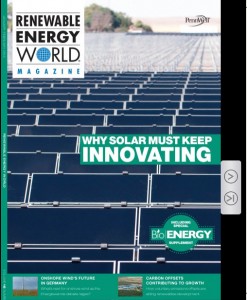 WHY SOLAR MUST KEEP INNOVATING
Narrow margins are expected for solar manufacturers this year, but the outlook is still sunny and innovation is the key to surviving and thriving.

GERMANY’S ONSHORE WIND DEBATE
Germany’s government says a clean-energy economy is the way forward, yet the nation appears unprepared to accept the implications of this decision for the energy market. What’s next for onshore wind as the Energiewende debate rages?

ROADMAP FOR ARMENIAN RENEWABLES
Armenia is dependent on imported fuel for transportation, electricity generation and heat. What is the scope for renewables development in this region of the Former Soviet Union?

INVESTMENT IN AFRICAN SOLAR GROWS
Private sector involvement in African renewable energy has traditionally been slim, but new entrepreneurs are arising and even aid organisations are taking steps to do commercial business.

LAST-MINUTE REPRIEVE FOR US WIND
Wind’s growth in the US could be strong for another 12 months now that the Production Tax Credit has been renewed. But if America decides otherwise next year, how can the industry maintain its momentum from 2014?

HOW ASIA’S LEAD COULD CHANGE THE BIOMASS MARKET
Wood-fired biomass has tended to mean feedstock from North America and generation in Europe, yet recent developments in Asia – particularly in Japan and South Korea – suggest the picture could soon become more complex.

SWEDEN’S BIOENERGY SUCCESS STORY
Biopower is Sweden’s leading energy source. What is behind this success story, and what can other nations learn from the Swedish experience?