Keeping pace with changing technology requires constant upgrading – but Ken Grundberg says the old devices that get left behind in that process often “have useful life left in them.”

“It depends on what your demands are,” Grundberg says. “If you’re surfing the Net, you don’t need a P4 processor, P2 or P3 would do it very well. For the casual user or someone who’s trying to be frugal, having a five-year-old computer is perfectly adequate.”

Grundberg is the president and CEO of Motor City Free Geek (MCFG), a Royal Oak nonprofit that recycles and refurbishes old computers for new use. The organization was founded in 2009, spurred by the rise of open-source operating software like Ubuntu and taking a page from the book of Portland’s own Free Geek.

MCFG accepts public donations of used computers and other electronics; Grundberg says the monthly number of donated devices can range from zero to dozens. From there, the organization’s all-volunteer staff restores the electronics to operating condition, usually setting them up with freely available software like Ubuntu and Open Office.

“There is a triage process,” Grundberg says. “The computer is basically powered up and if there’s no smoke it’s moved on to a more thorough inspection. If it looks healthy it then goes on to the pertinent processing. That would include deleting or wiping any personal data that looks like it’s there. Then we can install open-source software.”

MCFG engages a small army of volunteers to do that work. Over 200 volunteers work with MCFG, and the organization’s 2012 report showed that they put in over 4500 hours that year. Grundberg says that the work requires “a certain degree of judgment and practical experience,” so MCFG provides an orientation session to prepare all volunteers for the task at hand.

However, many volunteers come to MCFG with a preexisting skill set, developed through previous involvement in the field. Volunteer Walter Stepniowski has 21 years of IT experience and a day job as a network engineer, but he says he enjoys the variety of tasks he can get involved in at MCFG, from technical challenges to broader organizational projects.

“You’re not limited to any one thing,” Stepniowski says. “It gives you exposure on various levels.”

While some volunteers participate just for that experience, others are in it to earn a rehabbed computer of their own. Volunteers who help with electronics disassembly receive a computer after 24 hours of service; those who learn how to build computers may keep the sixth device they rebuild. The remaining refurbished devices are sold out of MCFG’s Royal Oak headquarters. Grundberg says the group tries to keep prices affordable. 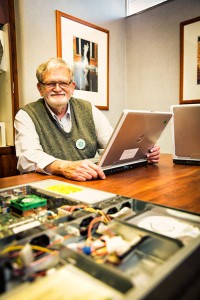 While MCFG will mark its fifth anniversary this year, organizations sharing its name have existed nationwide for well over a decade. The original Free Geek started in Portland in 2000, and other Free Geek organizations have since sprung up in communities from Seattle to Providence. While the various Free Geeks have a name and a mission in common, there’s no organizational body uniting them. As Grundberg puts it, MCFG is “an affiliate, not a franchise.” He says metro Detroit is a more challenging community for getting a Free Geek-style operation off the ground.

“We’ve found Detroit not quite as green as some of those other places,” Grundberg says. “Maybe it’s just the Motor City mindset.”

Still, Grundberg says there are inspiring signs for his organization; MCFG has recently gained the support of the Great Lakes Bioneers Detroit. On a more macro level, he says he’s encouraged by the local corporate world’s turn towards a greener approach, despite the fact that it’s still not much help to his own mission.

“To the proper, major corporations, this idea of recycling is becoming important,” Grundberg says. “GM, for instance, has a vice president in charge of sustainability. Bill Ford is known for being basically green. But if I try to call Bill on the telephone, I just don’t get a connection.”

Grundberg is hesitant to lay blame for the community’s sluggish progress towards sustainability, noting that “pointing at somebody else leaves three fingers pointing back at yourself.” He says his current focus is on making MCFG the best it can be, having spent most of his previous professional life adding to the problem he’s now trying to alleviate.

“My work and career has always involved product design, development, safety work, et cetera,” he says. “So maybe I’m cleaning up my karma a little bit by doing something for the end of product life cycles.”

Although Grundberg is now technically retired, he says he still winds up working more hours at MCFG than he did when he was working a traditional day job.

“Most of the time I find myself working 60 hours a week or more,” he says. “But it’s a compelling project.”

Grundberg’s initiative seems to serve as an inspiration to his legion of volunteers. Volunteer James Leithead says he’s excited by the “visible progress” the organization is making.

“I love just knowing that we’re going to have an impact going forward and I’m going to be a part of it,” Leithead says. “It’s the kind of place where you’re doing something fun and meaningful at the same time. And how often can you say that?

Clich here to be introduced to Motor City Free Geek