Mergers and acquisitions activity is an essential piston in the engine of free enterprise. Depressed in the wake of the financial crisis, M&A activity is rebounding, signaling the economic expansion in the U.S. may last longer than many economists predicted.

M&A activity is an important gauge of economic growth, as corporations as well as private equity and venture capital firms must not only possess the cash or stock to fund these transactions but also have confidence in the economic outlook to pursue deals.

Corporate cash hoards are at record highs and balance sheets are strong—two more signals that executives have the wherewithal to pursue deals. And while the economy is on firmer footing than in previous years, growth still remains tepid, which suggests executives may pursue growth by acquisition strategies to increase their bottom line with limited opportunities for boosting organic growth.

Stock market valuations continue to rise, providing companies wishing to make deals with the currency to do so in the form of increasing equity. In addition, interest rates are still near historic lows and remain stable, which provides another way for companies to fund M&A activity through added balance sheet leverage.

In this month’s commentary, we’ll examine the role of M&A activity in the economy and the markets, discuss the state of the global and U.S. M&A markets and place those observations in context in terms of the implications for the economy and markets.

M&A drivers
A growing economy and rising markets are two key drivers of M&A activity. They can set the stage for M&A in that they make it easier for companies to have the wherewithal and confidence to make an acquisition. Deloitte’s 2014 M&A trends report reveals that 89% of private equity executives expect average to high deal activity in 2014.

Other drivers include achieving economies of scale, increasing organizational size and broadening a company’s geographical reach. Finally, based on differences in tax legislation, today many companies (primarily in health care) are following the lure of lower corporate tax rates in Europe. Ultimately, for a merger or acquisition to make sense, it must deliver significant synergies to justify the takeover premium that a typical acquisition requires.

Deloitte’s M&A survey reported that executives who are considering involvement in deals during the next 12 to 18 months are motivated by a desire to jump-start growth, create opportunities for market leadership and change their overall business dynamic. Many executives also hope to expand or diversify their customer base via M&A activity.

Recent M&A trends
As of mid-June, M&A volume in dollars was up nearly 25% from the previous quarter, with the average deal premium coming in at 19.44%, according to Bloomberg (fig. 1). MergerMarket reported that the average deal size grew to $632.8 million in the first quarter, which represents the highest first-quarter average since 2009 and a 35% increase over the first quarter of 2013 (fig. 2). The value of technology deals is also climbing and hit the highest value in more than seven years. 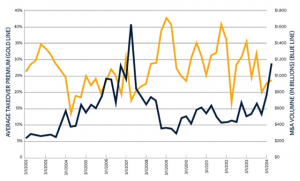 These are all signs that M&A is recovering from the financial crisis, although activity has not yet reached its 2007 level. A number of deal-related metrics are hitting highs not seen since the advent of the financial crisis, including syndicated loan deal activity and borrower acquisition-related loan volume, according to Dealogic. Also, the average year-to-date U.S. loan margin is at its lowest since 2008, indicating an increased appetite for deals.

The global M&A landscape
According to Bloomberg, the global M&A market is also recovering, although overall activity is flat through the first five months of 2014. This uptrend is fueled by overall global macroeconomic stability, the improving economic fundamentals in Europe and the recovery of the U.S. economy.
Dealogic reported in mid-June that global bankruptcy M&A activity is at a nine-year low, reflecting deal activity to date. In addition, global withdrawn M&A volume – deals that are proposed but then withdrawn—is at its highest level since 2008 and to date in 2014 is almost double the same volume in the year earlier period. The Wall Street Journal reported in late May that unsolicited takeover offers had neared $100 billion, nearly 7% of all global M&A activity by dollar amount, which is the largest share since 2007.
M&A outlook
If M&A activity continues at the pace it has year to date, total activity could reach $3.51 trillion by the end of the year, the most since 2007, according to Dealogic.
The long-term interest rate uncertainty notwithstanding, the stability of the low rate environment for the rest of the year is likely to continue to fuel M&A activity, as it makes it easier for acquiring companies to finance acquisitions via low-interest borrowing. In addition, WilmerHale notes in its 2014 M&A report that private equity companies continue to fuel the rise of M&A as they seek to dispose of companies they acquired prior to the financial crisis. In addition, these companies have the cash to make deals. Venture capital firms are also flush with cash for acquisitions.
Executives surveyed by Deloitte indicated they expect the technology, healthcare, alternative energy, oil and gas energy, and banking and securities financial services industries to be the most active M&A sectors for the next 12 to 18 months.

Market and economic implications
Whether the heightened activity signals a healthy, growing economy with more room to expand or an overvalued market is a subject of debate. On one hand, M&A activity is still a moderate 9% of nominal GDP, versus the 14% of nominal GDP it assumed in the third quarter of 2007, at the market’s last M&A bubble peak. Potentially, if M&A activity continues on the same trajectory, the U.S. economy could continue to expand for three to five years without reaching bubble territory.
On the other hand, last year’s surge in M&A activity coincided with the market reaching new highs, and some research suggests that merger activity sharply increases when stocks are highly valued. Also, a rise in M&A activity can be more consistent with a market top than a market bottom. There is room for both viewpoints as well, as the market certainly could correct without imperiling the overall uptrend in the economy.

M&A has typically been a mixed bag for shareholders of companies involved in such activities. While the shareholders of companies being acquired usually benefit, shareholders in companies doing the acquiring are usually left out of the party. However, in the first quarter of 2014, the average stock price of an acquiring company has increased by 3.7% between the day before and the day after the takeover announcement, according to Dealogic. This follows a 5.7% such increase in 2013. All of this indicates that investor sentiment around deal-making is shifting, with shareholders viewing acquisitions as positive rather than negative catalysts for the stock prices of acquiring companies.
What to watch for

M&A activity is an essential piston in the engine of free enterprise. To see a resurgence to a more normal level of the percentage of nominal GDP these past few years is, all things considered, a good sign. Looking forward, it would not surprise us if this activity continues to increase due to high levels of cash and treasury stock on corporate balance sheets, low levels of organic revenue growth and, sadly, a more favorable corporate tax environment overseas.