On May 29, 2015, Detroit boxing history will be made. Jackie Kallen (“The First Lady is Boxing”) will be joining forces with Connie Shamoun to form the first boxing promotional team in Michigan headed up by two women.
Kallen is no stranger to blazing new trails. The inspiration for the Meg Ryan film “Against the Ropes,” she has been the most famous female name in the male dominated sport of boxing. Like many others, Kallen hopes to see Detroit once again emerge as the strong fight mecca it used to be by putting together quality shows with good, solid matches. It is the goal of these women to highlight the best of the young talent that Detroit has to offer.
Connie Shamoun has been around the Detroit boxing scene for years and brings to the table a vast knowledge of the sport. Shamoun has been credited with helping to rebuild the Kronk amateur boxing team after years of relative quiet. Along with Sugar Hill (the nephew of the late Emanuel Steward) she was a huge supporter and sponsor of the team, traveling with them to tournaments across the country.
Rounding out the promotional team is Big Al Promotions and Db Promotions. Doors will open at 7:30 with fights starting at 8:30. Tickets will be $40 for general admission, $100 for Ringside and $125 for VIP seats. All table seats will include a fabulous sit-down dinner, There will also be a cigar room for those wanting to light up a fat one. Due to the intimacy of the room, every seat is a good one and the atmosphere is guaranteed to be electric.
The bout card is being shaped up and changed daily, with every qualified pro in Detroit vying for a spot. The two definites are undefeated prospects Zachariah Shamoun and Dorrell Van Horn, jr. The rest of the card will be filled with exciting contenders hoping to follow in the prestigious footsteps of Joe Louis, Thomas Hearns, and James Toney.
The seating is limited so get your tickets as soon as possible. To order online: Showdownatshenandoah@hotmail.com or https://www.neptix.com/events/19525. By phone: (248) 687-0365. 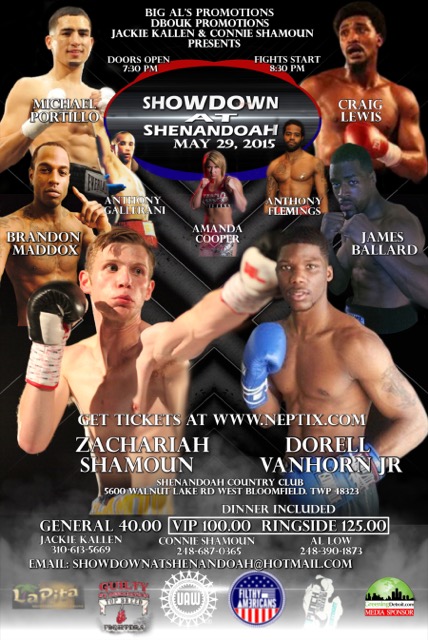