Ralphe Armstrong got it right. A prolific musician, he understood the importance of copyrighting his melodies. Thus, one day when he heard his music in the background of a Nike commercial, he had all the documented proof he needed. His lawyers contacted Nike and the case was settled out of court.

Mr. Armstrong will be retelling his experience at World Intellectual Property Day on April 23 at the Charles H. Wright Museum of African American History. This year, more than 300 cities across the world are expected to participate with seminars, lectures and concerts. The theme is music. “The day is about celebrating creativity and the creative process,” commented Michael Stewart, Public Education Committee Chair for the American Intellectual Property Law Association, which is co-sponsoring the event. In addition to speaking in Detroit, his committee is also overseeing programs in approximately 24 U.S. cities.

Here in Detroit, the day will begin with a seminar from 3-5 p.m. on how to protect your intellectual property, including patents, trademarks and copyrights. Hosted by radio personality Suzi Marteny, the seminar will focus on music, but other areas will be covered, such as inventions, processes and trade names. Mr. Stewart will speak on patents and trademarks and Attorney Joe Bellanca will speak on copyrighting music.

Following the seminar, there will be a one-hour reception in the museum’s rotunda, featuring live music from 15-year-old Alison Albrecht, winner of the Michigan State Fair’s 2014 Super Star competition. Local law firms, talent agencies and music-related businesses will be present with displays, exhibit tables and representatives to speak with the public.

At 6 p.m., Satori Shakoor of the Brides of Funkenstein and Secret Society of Twisted Storytellers will host the evening speakers. Mr. Armstrong, will present his story along with Attorney Howard Hertz, who has represented Eminem, and Atlantic Records, and is the President of the Detroit Music Awards Foundation. Awards will be given to the winners of the Detroit Science Fair by Christal Sheppard, director of Detroit’s Elijah McCoy U.S. Patent and Trademark Office.

The evening will end with a catered reception in the museum’s Rotunda. Benny Reeves with the Paul Carey Band will provide live entertainment, as the audience has one more opportunity to visit with the speakers and business representatives.

This event is a joint presentation of the World Intellectual Property Organization (WIPO), a division of the United Nations, the U.S. Patent and Trademark Office and the American Intellectual Property Law Association. Sponsorship opportunities are still available, as are display tables at the reception and ads in the event program. 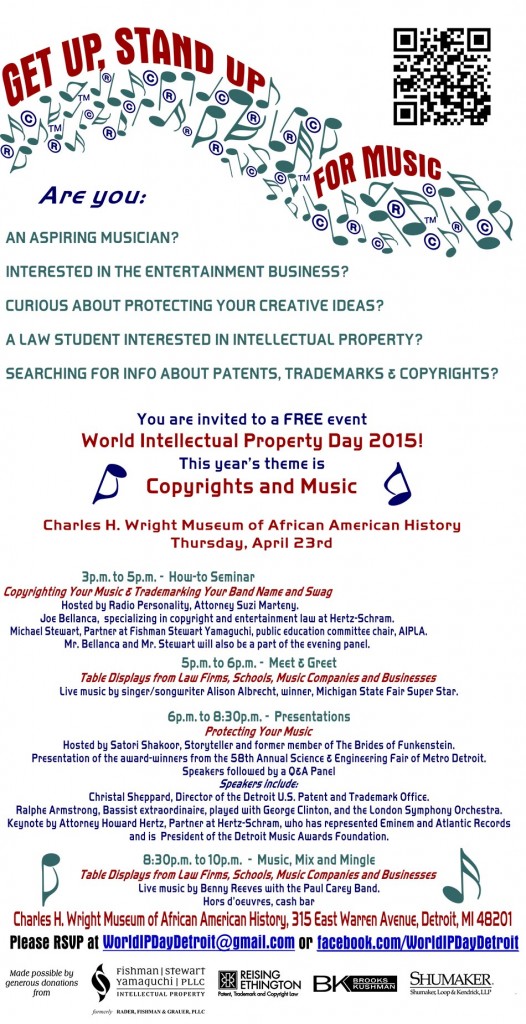