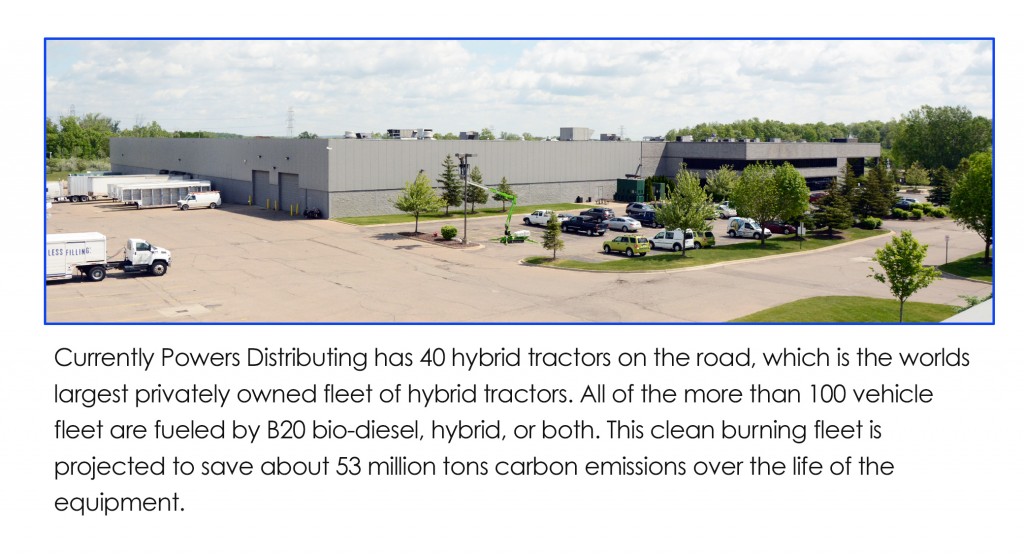 Close your eyes. Visualize a bottle of your favorite ice-cold craft beer in your hands. Now, imagine how much energy it took to get it there? No one knows this better than Gary Thompson, COO of Powers Distributing, (Orion Twp.) the wholesale beer distributor servicing Oakland and Macomb counties. According to Gary, “one of the biggest costs we have …is the cost of energy. The money we save practicing sustainability, recycling, and using renewable energy means we have more to invest in our people, our brands, our community …and drive more profit to the bottom line.”

Started as a Miller distributor in 1939, Powers has today built itself into one of the premiere craft beer wholesalers in the country. To give you an idea of the scope of the organization, Powers Distributing is a family owned business with over 75 years of history, more than 200 employees, and a warehouse facility over 200,000 sq/ft including a cooler with 12,500 sq/ft of refrigeration. Powers Distributing services over 2,600 retail customers with a fleet of over 100 vehicles that use over 12,000 gallons of bio-diesel fuel a month. The combined ‘energy footprint’ of electricity, gas, and liquid fuel is enormous. As Gary explained it “…the entire beer supply chain from brewing to distribution to your refrigerator is a long and energy hungry road.”

Due to the energy intensive nature of the operation, environmental responsibility is built into the DNA at Powers Distributing. Starting back in 2007 the sales fleet become eco-friendly when they converted their off-premise sales team from V8 cargo vans to four cylinder Saturn Vue’s and several newer (at the time) Ford Flex–Fuel vehicles. In 2008, the sales management team began driving hybrids. In 2009, Powers Distributing became the first beverage wholesaler in the country to convert 50% of its delivery fleet to a more fuel efficient hybrid route tractors.  Currently they have 40 hybrid tractors on the road, which is the worlds largest privately owned fleet of hybrid tractors. All of the more than 100 vehicle fleet are fueled by B20 bio-diesel, hybrid, or both. This clean burning fleet is projected to save about 53 million tons carbon emissions over the life of the equipment.

To save energy inside the office, Powers has transformed industrial age traditions of beer distributing by moving to “cloud” computing for email, sales documents and analytics. Cloud computing is far more energy efficient than traditional in-house solutions, and has other benefits such as high-availability, collaborative advantages, and security on a scale that would be difficult to cost effectively achieve using traditional methods. 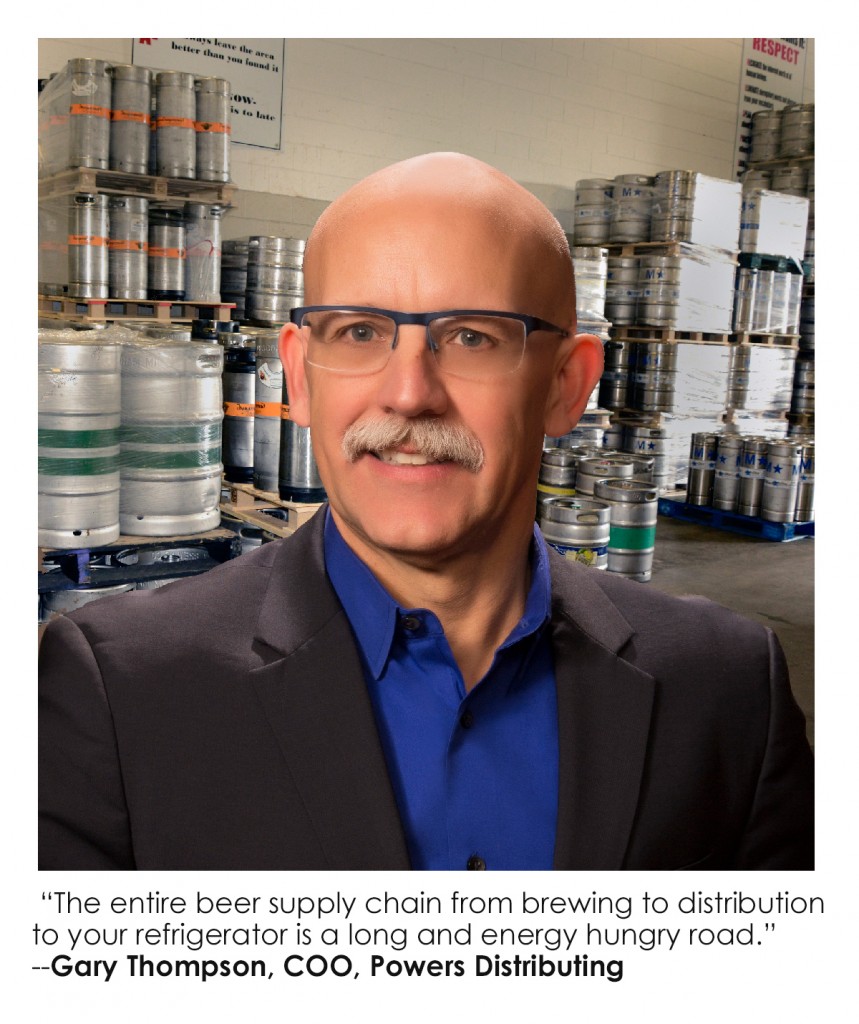 Due to the nature of the business, recycling is such an important component that they built their own building to house the recycling operations. As you can guess with beer distribution, tons of glass bottles, aluminum cans, cardboard, plastic bottles, and used stretch film are recycled every month. They also recycle office paper, shop metal, and wooden pallets that are converted into about a quarter million pounds of wood pellets every year. Grounds and parking areas surrounding the warehouse are irrigated by a storm water run-off collection system. Recycled rainwater is used to water lawn.

Projects to upgrade energy efficient lighting are well under way. Recently, they have started to replace high bay, high intensity discharge (HID) fixtures with energy efficient LED lighting that could save as much as 70%. ThinkNRG.net, designed the system that replaces over 400 lamps with high efficiency LED manufactured and installed by Michigan contractors. The warehouse and office area also include automatic sensors to shut-off lighting when not in use.

Last year, after a cost-benefit analysis of various methods for renewable energy including biogas and wind, the Powers Distributing team decided to install a solar array on the roof their new recycling building. Local Michigan solar experts, Michigan Solar Solutions (www.michigansolarsolutions.com) were called in to propose, design and install the system. 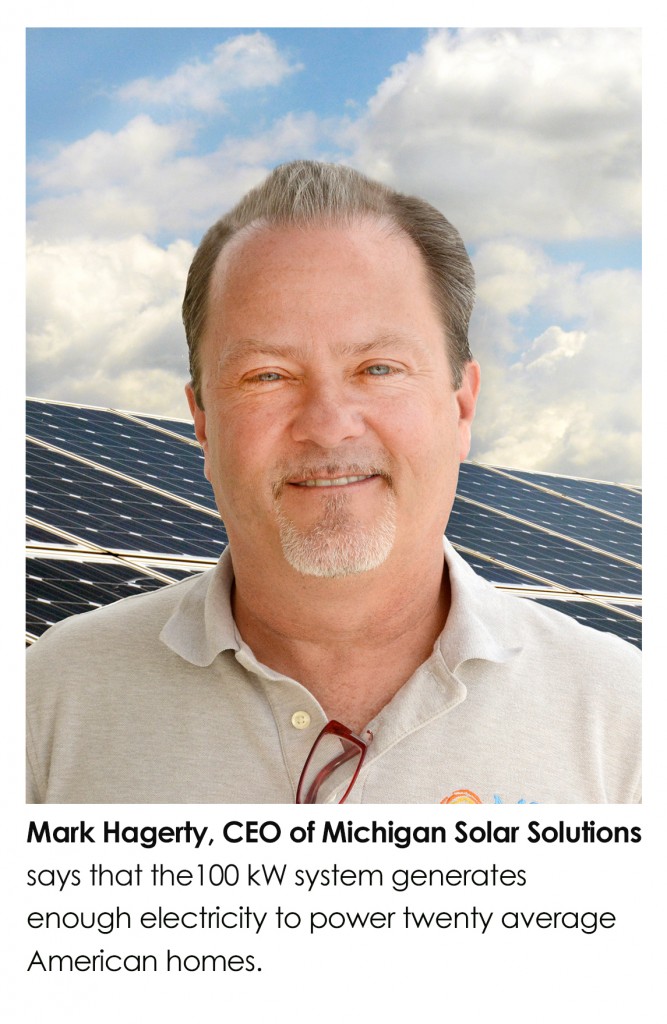 The system is designed to off-set the total electrical demand for the recycling building and excess power flows over into the main warehouse. Mark Hagerty, CEO of Michigan Solar Solutions, says that the kW (kilowatt) system generates enough electricity to power twenty average American homes. Comprised of 352 solar panels (made in USA by Solar World), the 16,000 sq/ft array is warranted for 25 year and has a life expectancy of 35 years. Solar panels produce the most power mid-day when demand is high. Each panel has a micro-inverter that converts the DC current to AC that is connected to the building. The mico-inverters also allow for precise monitoring of the production of each solar panel in the system. Great! But do they make money? About one year after the system is up and running it is reported to be saving an average of $2,000.00 a month in electric bills and is on track to amortize itself in 8 years.