These one-of-a-kind awards were designed by GreeningDetroit.com Founder John Carlos and Executive Director Cathleen Francois with ReclaimDetroit, a division of Detroit Non-Profit EcoWorks, to be a representation of what the award stands for: an expression of the regions history, sustainability, and innovative thought. Reclaimed from the Firehouse across from Cobo Hall, the over 500 year old wood was used as the base of the award. The Firehouse is presently being renovated into the Foundation Hotel, (http://aparium.com/hotels/the-foundation/). 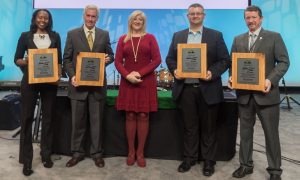 “We contacted the well known non-profit, Eco-Works, whose subsidiary Reclaim Detroit (http://reclaimdetroit.org) has a mission of repurposing materials from historic and blighted sites,” states Francois. The Firehouse was a perfect choice for the bases to come from, as the department engines were housed there, and the department itself was in the building from about 1840 to 2012. Sustainable, historical, and mobile help for the city. The award    speaks to everything we believe the companies they were given to encompass for the auto industry.”

The millennial members of GreeningDetroit.com’s TIP Team, Alan Xia, Jason Best, Jill Dougherty, and Katherine Robertson, were chosen for their innovative expertise in new technologies in the ever-evolving and fast-changing automotive industry. Find out more about them here: (https://www.greeningdetroit.com/2017-north-american-international-auto-show/) 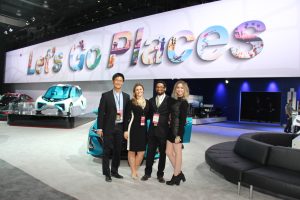 RECEIVED BY DAVE STENSON, FOUNDER AND CEO, INVENTEV (http://www.inventev.com), OUR PLANET GUARDIANS (presented by Alan Xia, Electrical and Mechanical Engineer, Ford Motor Company & Kettering University): From hybrid trucks to hydrogen cars, to sustainable build materials employed by suppliers and OEMS, there are many truly innovative products out there this year, thus making this decision quite difficult.

However, Inventev’s PHEV commercial truck application has stood out. The product addresses a vehicle market with a solution that can significantly reduce the usage of fossil fuels with its PHEV application, thereby reducing or completely eliminating idling generator time to power commercial booms and other accessories. In addition, the solution also creates value by providing emergency power in the event of an emergency outage. While there are other EV conversion companies out there, Inventev has taken on an approach that is unique and has further taken the risk to develop its own transmission unit for its application, even more, commendable for a startup company. With a large number of commercial trucks out there today, Inventev’s product has the opportunity to create a substantial impact. It is our honor then to select Inventev as the recipient of Greening Detroit’s 2017 Planet Guardians Award this 2017 North American International Auto Show.

The autonomy trend on the rise, a certain aesthetic has occurred. Most electric, zero emissions, and autonomous concepts have shown up as smaller quirky displays with a lot of character. A lot of the new releases have shown vehicles that have appearances venturing further from what a car traditionally looks like. These are very interesting, and signify a new era for the automotive industry. While I believe vehicles will look less like vehicles, I still think the automobile and its appearance will lend greatly to the new era of autonomy. This being said, Nissan made a big statement at this years Detroit auto show with their Vmotion 2.0 concept. Their vision of autonomy is similar to mine, a vision of luxury appearance and smart technology.

Nissan chose a sleek proportion showing off the length and width of the vehicle. Creating a fast look, but also allowing for a spacious cabin. The geometric exterior lines evoke emotion and movement. The darkness of the upper creates a lot of focus on the body making it impossible to ignore the beautiful forms and surfacing that the exterior has to offer.

Aside from first impressions, the Vmotion has impressive technology to offer. Not a lot has been released on the energy that drives the car but it has been said to work towards Nissans goal of zero emissions. They also integrated an interesting lighting concept in which the area around the emblem and the rear diffuser glow while in autonomous mode.

Down to every detail including proportion, surfacing, stance, key lines, design statement, color, interior, and lighting, Nissan made a statement that couldn’t be ignored. For all of these reasons, I chose Nissan to receive the award of “best dressed” for the new Vmotion 2.0.

This year I decided to give the “Leader of the Pack” award to Wind River for their innovation in the Helix Chassis. The Helix Chassis is a Automotive grade Linux architecture developed in conjunction with intel that supports fully autonomous vehicle platforms while supplying the security and privacy that consumers demand.  A big theme of this year’s North American International Auto Show (NAIAS) was intercity mobility and autonomous driving vehicles.

However only one company showcased an in-car model of what this proposed architecture would look like. By incorporating intel security as well as creature comforts such as android and apple support it was the most advanced system at the auto show.  With full rollout of autonomous vehicles scheduled for 2021 (From Fords Press Conference) the focus will be increasingly put on this architecture. For being the first to market with a secure and viable product I award Wind River the “Leader of the Pack” award.

For more about what’s going on in the circles of GreeningDetroit, ReclaimDetroit and EcoWorks, please visit their respective websites.

Although there are numerous companies in Detroit with rich history in automotive, there is one that stands above the rest. It’s name alone commands recognition however, it is the company commitment to its people that is truly commendable. Ford Motor Company has championed itself as a true “Workforce Warrior”. By promoting new technologies within their unprecedented youth programs, they recognize that building the intelligent transportation workforce of the future must begin at an early age. Furthermore, their loyalty to the local economy by investing in their US facilities sets a precedent for the rest of the industry.

It is with great respect and adoration that I have select Ford as the 2017 North American International Auto Show Workforce Warrior Award recipient.