Additional $1.6 Million in Funding for the Water Residential Assistance Program (WRAP) will Allow up to 2,000 More Eligible Low-Income Detroit Residents to Become Enrolled

The Great Lakes Water Authority (GLWA) Board of Directors this week approved a $1.7 million reallocation of WRAP (Water Residential Assistance Program) funding to the city of Detroit, as well as to the city of Flint, upon its return to GLWA as a contract customer, which is a program requirement. This brings the total commitment for Detroit eligible low-income residential households to $7.3 million since WRAP was launched on March 1, 2016.

The reallocated funding is from the uncommitted 2016 bill assistance funds from GLWA’s three major county partners: Wayne, Oakland and Macomb Counties. Of the $1.7 million being reallocated, just over $1.6 million will be directed to the city of Detroit, and approximately $132,000 will be set aside to provide future assistance to eligible Flint households once Flint executes the proposed long-term contract with GLWA.

“The decision by the GLWA Board of Directors to reallocate uncommitted funding to Detroit and Flint reinforces the spirit of regional collaboration that was at the heart of the Authority’s formation,” said Sue F. McCormick, Chief Executive Officer of GLWA

WRAP, which is administered by Wayne Metropolitan Community Action Agency, provides qualifying customers at or below 150 percent of the federal poverty threshold with help in paying current and past-due water bills. Eligible customers receive a $25 monthly credit toward current water bills with any arrears suspended for 12-24 months. Customers, who successfully make their monthly payments for six months, receive an additional credit of up to $350 toward the arrearages (up to $700 during a 12-month period). Qualifying residents with water usage exceeding 120 percent of the average household water consumption in the city are also eligible for a free water conservation audit, and up to an additional $1,000 for minor household plumbing repairs based on audit results.

“We are committed to making sure every Detroit water customer has a path toward assistance,” said Gary Brown, director of the Detroit Water and Sewerage Department. “The reallocated funding for Detroit allows us to continue this help by enrolling up to 2,000 more Detroit households who face financial difficulties in paying their water bill. This is in addition to the nearly 6,000 enrolled in WRAP now. A robust and comprehensive program with a 90 percent retention rate, WRAP has successfully reduced Detroit low-income residents’ water account balances and decreased their bill to the average residential bill of close to $50 for a two-person household.”

Since its inception in March 2016, 58 GLWA customer communities have opted-in to WRAP, which is a first of its kind program in Michigan and one of only a few sustainable assistance plans in the country. Initial WRAP funding for Fiscal Year 2016 was $4.5 million, which was expected to assist nearly 5,000 households in Southeast Michigan.

From March 2016 – April 2017, nearly $6 million has been dedicated to Detroit from the total WRAP allocation and several other funding sources, bringing the total amount committed today to $7.3 million for assistance in Detroit. To date:
Number of Detroit households enrolled in WRAP: 5,766;
Number of Detroit households receiving minor home plumbing repairs: 558;
Amount of funds used for minor home plumbing repairs: $325,534.38.

Eligible residents may apply for WRAP by calling 313-386-9727, or learn more at waynemetro.org/wrap. 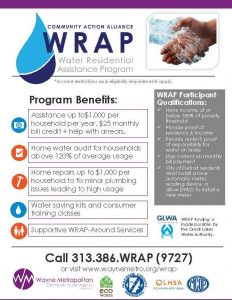