Michigan Clean Energy Conference and Fair attracted 200 folks from Traverse City and all over Michigan.  Saturday morning, Dave Harwood, DTE Renewable Energy Director, talked about DTE’s plan to reduce their carbon emissions by more than 80% by 2050.  Mary Powell, Green Mountain Power CEO, talked about her Vermont utility being customer obsessed and the first utility to be a benefit (B) corp, and all their initiatives including leasing Powerwalls to their customers and helping customers go off-grid if they desire.  At the end of the conference, Skip Pruss chatted with Governor Granholm about the clean energy transformation that is accelerating.  Thanks to Groundwork Center for Resilient Communities, sponsors, exhibitors, presenters, and participants for making this a great event. 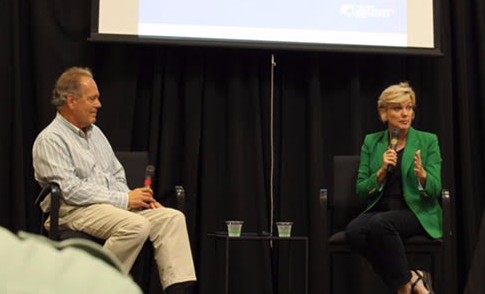 MPSC has made changes to the way avoided costs are determined under the federal Public Utility Regulatory Policies Act (PURPA). In Michigan, there are 45 facilities under PURPA contracts with utilities, mostly landfill gas and hydro.  The long-awaited changes to determining avoided costs, the first in 25 years, could protect independent power producers who say they are at risk of shutting down.  Under the MPSC order in a Consumers Energy case, instead of using the costs of building a new coal plant as a baseline, avoided costs will now be based on combined cycle natural gas plants.  The MPSC’s May 31 order also amends the “Standard Offer” tariff for independent producers by allowing larger projects (up to 2 MW instead of 100 kw) and contracts for up to 20 years instead of five. More details.

City of Ypsilanti has been awarded a Gold designation for supporting solar energy by SolSmart, a national organization dedicated to helping communities reduce barriers to solar energy. To achieve Gold, a community must streamline solar permitting, track key metrics, and encourage solar installations. Ypsilanti is the only community in Michigan to achieve this award, and one of only 58 communities nationwide.  In 2013, the City adopted a goal of 1,000 solar roofs or 5 MW by 2020 and is a fifth of the way towards that goal. In 2016, the City worked with SolarYpsi, DTE, and Highland Cemetery to install an 800 kW solar field, and SolarYpsi worked with a private donor to install 50 kW of PV on the Fire Department roof.   More details.

General Motors has built 130 self-driving Chevrolet Bolt electric cars at its Orion Assembly Plant, making it among the first automakers to mass produce self-driving vehicles. The Bolt can go 238 miles on a charge and is ideal for use as an autonomous vehicle because its electric system can charge the computers needed for self-driving capability.  The cars have multiple cameras and 40 sensors, including a radar system that scans around corners for oncoming traffic. Five spinning Lidar cylinders on top of the car use lasers to make a three-dimensional map of the area as the vehicle is driving.
More details.

City of Dearborn has launched a new bike-share program with Zagster.  50 cruiser bikes will be available at 10 stations located throughout downtown Dearborn for members to use for local trips. More details.

Kalamazoo Valley Community College’s wind technician training program recently graduated 11 students from across the country. The hands-on, six months Wind Turbine Technician Academy provides a fast track to jobs as a wind technician.  More than 96% of alumni work in the wind industry, and the majority get job offers prior to graduation. The academy is offered twice a year in January and July.  More details.

The Ray, named after green industrialist Ray Anderson, is an 18-mile stretch of I-85 in Georgia where new technologies are being tested for what could be a green highway of the future.  One of the most eye-catching technologies is a 20-ft bright red steel “solar tree” in front of the visitors’ center at exit 2. It has 12 PV panels that offer free charges to electric vehicles in about 25 minutes.  In the middle of the parking lot is the Wattway, a drivable solar pavement. The testing strip is 52 feet long and made of thin, skid-resistant solar panels with glass overlay.  At exit 14, a 5-acre, 3,000-panel solar farm is planned.  More details.

LEGO Group has achieved its 100% renewable energy target 3 years ahead of schedule.  The company’s latest investment was a 25% stake in an offshore wind farm, located off Liverpool.  In 2016, LEGO used more than 360 GWh of energy to produce more than 75 billion LEGO bricks.  To celebrate the milestone, the LEGO Group has constructed the largest ever LEGO wind turbine. Built with 146,000 LEGO bricks, the 7.5 meter tall wind turbine will be at the LEGOLAND Windsor Resort in the UK.  More details.

Climate Course for Teachers is available from the American Meteorological Society. This course identifies the factors that determine and define climate. The connections are made between climate and solar input, temperature, humidity, precipitation, and severe storms. Methods of measurement and modeling of climate are discussed. Global climate change is discussed in the context of science research. Contact Dave Chapman at dave.chapman@okemosk12.net for further information.

Colorado Utility Regulators will require the state’s largest utility to put a dollar figure on the impacts from carbon emissions from future power sources, the social cost of carbon.  Last month’s ruling by the Public Utilities Commission won’t have an immediate impact, but when Xcel next assesses plans to meet future demand, a new coal plant will be nearly impossible to justify and natural gas turbines will be less competitive against wind and solar.  More details

Ameren Corp. has completed what it is touting as one of the most advanced utility-scale microgrids in North America.  The $5 million facility is located at Ameren’s Technology Applications Center adjacent to the U of Illinois in Champaign.  The microgrid is one of the few in the world that operate at utility-scale voltages, between 4 kV and 34.5 kV. The generation assets include a 100 kW wind turbine, 125 kW solar array, two natural gas generators that can generate 1,000 kW, and battery system that can supply 250 kW of energy for two hours. More details.

Energy Storage usually means batteries, but other approaches are being tried around the world.  More details.

Marcus Garvey Microgrid, the first microgrid for the city’s affordable housing, was installed as part of a $190 million refinancing and renovation for Brooklyn’s Marcus Garvey Apartments, a 625-unit, 10-city block apartment complex. Now 21 of its rooftops have solar panels that make up a 400 kW array, coupled with a 400 kW fuel cell and a 300 kW lithium battery.  More details.

ASES’s 46th annual conference, “SOLAR 2017: Building a 100% Renewable Energy Community,” will be held October 9-12 in Denver, between the weekends of public days at the U.S. DOE Solar Decathlon.  Registration for SOLAR 2017 is now available online.

Schuette: Science, Technology and Common Sense Should Drive the Timeline for Closure of Line 5 Make a Difference With Kroger Community Rewards!