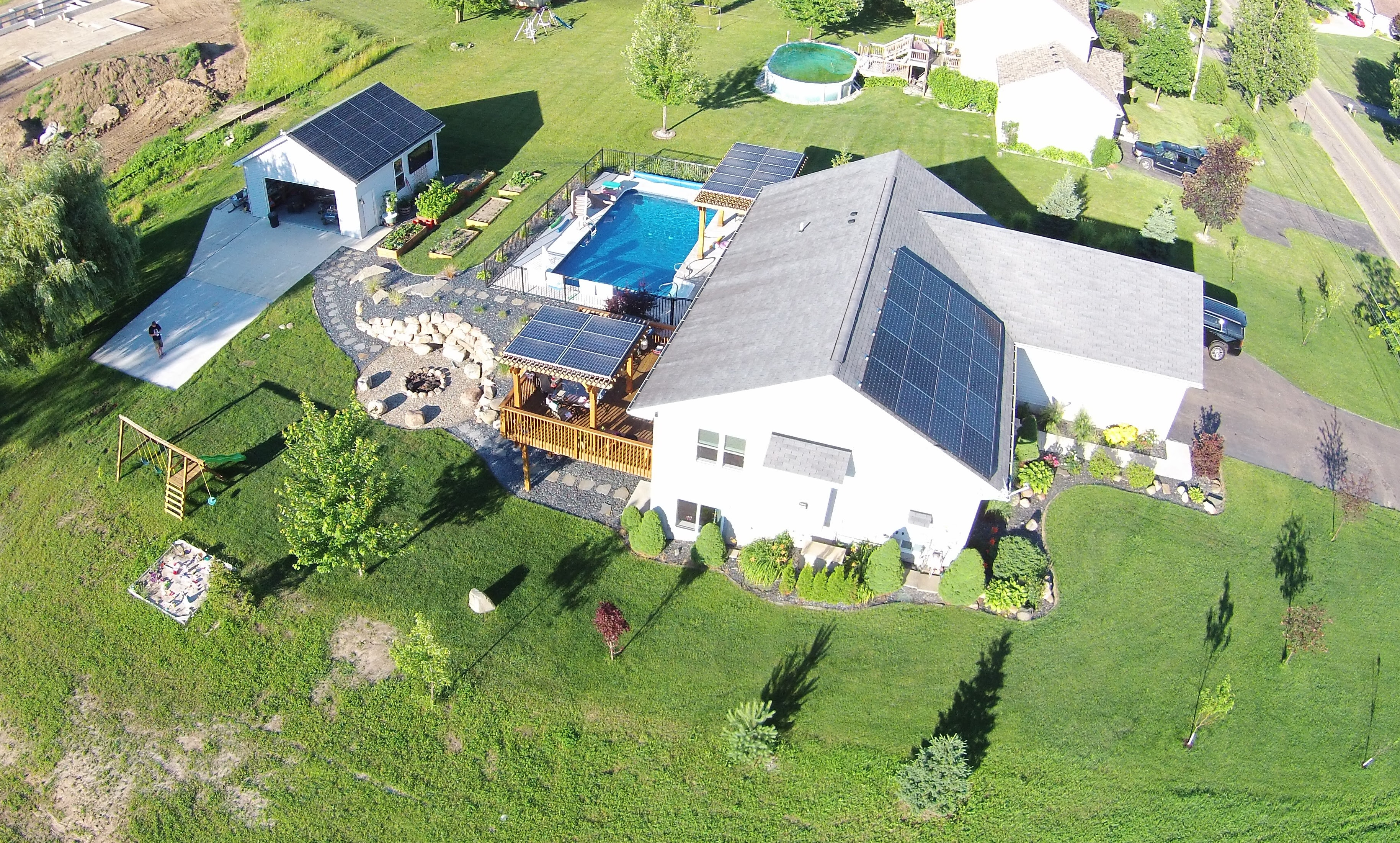 National Solar Home Tour sponsored by the American Solar Energy Society’s (ASES) is the world’s largest grassroots solar event.  GLREA, the Michigan state chapter of ASES, assists local coordinators who organize tours that you can attend.  Tours are being planned for Saturday, October 7 and October 14 in 9 Michigan communities.  Now in its 22nd year, this event offers the opportunity to tour innovative homes and buildings to see how you can use solar energy, energy efficiency, and other sustainable technologies. This year the Clarkston tour has Jesse Smith’s house which has a high voltage LG Chem Battery and SolarEdge’s StorEdge featuring peak shaving and electrical backup.  www.glrea.org

Net Metering Policies are supported by about 3 out of every 4 Americans according to a national poll by UM researchers, the first national public opinion poll on the topic.  The researchers found strong support for net metering, regardless of respondents’ age, political party, or even belief in climate change.  “Although net metering has been a hotly debated topic in most states in recent years, the public is clearly in support of it” said Sarah Mills, a postdoctoral fellow at UM’s Ford School of Public Policy, which published the report findings. More details.

Portable Solar Panels will be built for Puerto Rico relief efforts by formerly homeless men and women from Detroit.    The Rev. Faith Fowler, executive director of Cass Community Social Services, has said that supplies to build 15 portable solar panels have been ordered and are on their way to the nonprofit’s Green Industries.  The 100-watt, 12-volt polycrystalline portable solar panels can be used to charge cell phones, computers, or run fans or lights or even small refrigerators.  More details.

Monroe County Community College has switched from its old conventional HVAC system to a new geothermal system. The two-year, $16.1 million project has 288 wells that are 350 to 400 feet deep. The College will save about $5.55 million in electricity, gas and water costs over the next 20 years or an average of $275,000 a year.  More details.

Kalamazoo Valley Community College’s pioneering wind turbine technician training program has seen steady interest and enrollment since its first class in 2009. A total of 190 students have graduated from the program, getting jobs throughout the U.S.  The program, which grants certificates to 12 students every six months, was the first BZEE accredited program in the U.S, and is still the only program in the U.S. where students can become internationally certified. The program has a 96 percent job placement rate for graduates.  More details.

U.S. International Trade Commission (ITC) has found that low-cost, imported solar panels from China and other countries have hurt two domestic manufacturers, Suniva and SolarWorld.  “Analysts say Suniva’s remedy proposal will double the price of solar, destroy two-thirds of demand, erode billions of dollars in investment and unnecessarily force 88,000 Americans to lose their jobs in 2018,” says Abigail Ross Hopper, SEIA’s president and CEO.  The ITC is expected to hold a public hearing on October 3 as it considers potential remedies to help manufacturers including levying tariffs on imported panels. The ITC will then forward recommendations to President Trump who will have 60 days to decide what to do. More details.Renewable Thermal Collaborative is a new group founded by five manufacturing giants — Cargill, General Motors, Kimberly-Clark, Mars and P&G — and the city of Philadelphia.  The corporate world has inspired the addition of 8 GW of solar and wind electricity to the worldwide grid in the past five years.  However, one third of energy consumption in manufacturing is heating and cooling.  Some renewable thermal options that will be explored by the new working group include biomass, biogas, geothermal, landfill gas and solar thermal. More details.

New Solar Water Coolers are panels that sit atop a roof and they have three components. The first is a plastic layer topped with a silver coating that reflects nearly all incoming sunlight, keeping the panel from heating up. The plastic layer sits atop a snaking copper tube. Water is piped through the tube, where it sheds heat to the plastic. That heat is then radiated out by the plastic at a wavelength in the middle region of the infrared spectrum, which is not absorbed by the atmosphere. Stanford University researchers have reported in Nature Energy that their solar cooler setup would lower a Las Vegas building’s air conditioning electrical demand by 21% over the summer.  More details.

Iowa’s New License Plate in 2018 will include a wind turbine. 36% of Iowa’s electricity comes from wind power and more than 17,000 wind-related jobs could be in Iowa by 2020.  More details.

MidAmerican Energy is upgrading hundreds of its older wind turbines in Iowa, moving it closer to its vision of providing renewable energy equal to 100% of its customers’ annual energy use. Under the plan, many older GE wind turbines will be retrofitted with newer, more efficient components, such as longer blades. Last year the $3.6 billion, 2 GW Wind XI project was announced.  In 2021, when the repowering and Wind XI projects are complete, the utility expects to generate renewable energy equal to 95 percent of their Iowa retail customers’ annual use. More details.

ASES’s 46th annual conference, “SOLAR 2017: Building a 100% Renewable Energy Community,” will be held October 9-12 in Denver, between the weekends of public days at the U.S. DOE Solar Decathlon.  SOLAR 2017

Interested in Installing Renewable Energy Systems?  There will be a free presentation at the VanBuren Conference Center, 490 South Paw Paw St. in Lawrence on Wednesday, October 11th from 7 to 10 PM.  Speakers will include homeowners talking about their grid-tied systems, an expert on weatherization and two experienced installers, Art Toy from Four Elements Energy and Mike Linsea from Solar Winds.

A Sustainable Future: Exploring Solar Energy Options will be held by the League of Women Voters of the Lansing Area on Wed, Oct 18, 7:00 PM at Edgewood United Church, 469 N. Hagadorn Rd, in East Lansing.  A panel of representatives from Lansing Board of Water & Light, Consumers Energy, GLREA, and Michigan Interfaith Power & Light will focus on options for individuals, public institutions and businesses. For additional information, contact Deanna Hanieski at haniesd@lcc.edu.

100% Renewable Energy: Can We Do It? will be hosted by GLREA and the Lansing Area Solar Users Network at Michigan Energy Options in East Lansing on Thursday, Oct. 26, 4:00-5:00 pm.  John Sarver will present some of the studies and issues related to achieving 100% renewable energy.  Join us to discuss how we can do this in our community, state, and nation.  Michigan Energy Options is at 405 Grove St.  There is no parking on Grove St. so best to park in the Grove St. Parking Ramp (off Albert) or on MAC St.

Solar Stuff: Everything is Going Solar will be hosted by GLREA and the Lansing Area Solar Users Network at Michigan Energy Options on Thursday, Nov. 16, 5:30-6:30 pm.  Solar panels that produce electricity or hot water have become more common, but what about other solar equipment that you can buy to become part of the solar revolution.  Heidi Porter will discuss a variety of “solar stuff” including phone chargers, yard lights, grills, and lawn mowers.
Click here to be introduced to the GLREA