Great things are happening in the city of Detroit. On April 21st the Detroit City Council Green Task Force, Lead by Detroit Councilman Scott Benson, held its Second Annual Earth Day Award ceremony and breakfast. This celebration acknowledges the pillars in our community that are promoting the green initiative and sustainability. 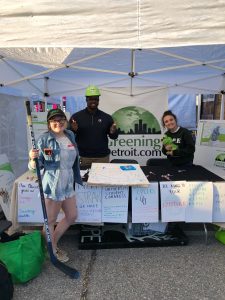 The ceremony featured familiar faces from the community such as the Detroit Black Community Food Security Network. This organization is a non-profit organization that is dedicated to the cultivation of healthier food and the politics that go into food production. With all their diligent work they were amongst the honorees for the ceremony.

The ceremony featured keynote speaker Guy Williams, President & CEO of Detroiters Working for Environmental Justice. Williams gave a powerful speech on just how important sustainability and combating pollution is to our population. During his speech, Williams became a bit emotional as he was outlining these statistics. “Three people a day are dying due to airborne related illness”. With statics like that how can you not take heed to the warnings.

Towards the end of the award ceremony Detroit City Council president Brenda Jones made an appearance and delivered a powerful message, expounding on the Importance of the Detroit Green Task Force and emphasized “When you fight, you win!”

Kerwin Wimbley, whom as the subject matter expert of sustainability for the Green Task Force advises that its initiatives will continue to grow larger until all of our citizens are aware that a change needs to take place. With the success of this award ceremony and all its participants it is safe to say that there will be many more great things to take place in the city of Detroit thanks to the efforts of the Detroit City Council Green Task Force. The best is yet to come.

PBS Books Brings You Up Close With The World’s Great And Emerging Authors And Celebrity Writers At The Largest Event For Books In The U.S. Biggest Loser Are Big Winners at 2018 Michigan Energy Summit