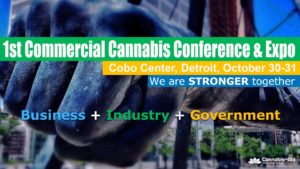 Business, industry and government professionals flocked to Cobo Hall this past week for a first of its kind event – Michigan’s 1st Commercial Cannabis Conference & Expo, directed by Thomas Tong. The gathering represents a predictable future where cannabis and hemp are both legal. Come this November 6th, the passing of Proposition 1 births two sectors, hemp and cannabis in Michigan. Annually, Tong intends to gather all the key players to take a stand for a strong and healthy commercial hemp & cannabis markets in Michigan.

The conference was made up of a wide range of pro-cannabis companies, municipalities, and associations of industry. With over 50 speakers and 100 companies participating, the inaugural event can be deemed a big success for the emerging state market. According to Tong, “if we want to be the best hemp and cannabis programs, we must come together. First, we must fight for our existence. Then, we must consciously build programs that make everyone win, from a patient to a corporation.”

Described as “our” state community conference,  the event kicked off by showing the diversity of the existing cannabis community, from a child patient and mother, Amie and Jayden Carter  to an iconic leader for legalization, Keith Stroup. In 1970, Stroup found the National Organization for the Reform of Marijuana Laws  NORML, the largest pro cannabis activist organization in the world with chapters in almost every single major city.

Designed for community inclusion, the conference operates on a cost recovery model, allowing all stakeholders to participate. From traditional conservative companies such as Crowe, to student programs by Green Wolverine, everyone that is serious about cannabis and hemp were invited.

Stroup was followed by Sarai Garret, CEO of The Marketing Millennial, who focused the future of cannabis. Sara is enthusiastic over Michigan’s cannabis market in Michigan and believes it’ll be as big here as it is in California.

An array of high valued sessions ran throughout the 2 day event. From real estate in the cannabis market hosted by the Cannabis Brokers of Michigan, facility specialists on Solar from SK Ayers, President and CEO of Ecojiva, lighting, and laws, to Cannabis Therapy by William Jamieson from 420Patients. There were so many. Of notable mention were the “SUPER” sessions on Government as well as Security.

Tong created the event with the goal of catalyzing the state industries and forging relationships across business, industry, and government. A key principle of the conference is “community before competition”.

To highlight community, Tong also created a prominent industry party, simply called “The” MIXER. Held at the Waterview Loft, located above the Port Authority on Atwater Street, the event brought out some of the biggest names in the industry, as well as local stars. Guests were wined, dined, and witness to the Award Ceremony, honoring Dr. Christian “Trick-Trick” Mathis, attorney and founder of the National Organization for the Reform of Marijuana Laws Keith Stroup, Candidate for Governor and Senate Democratic Leader, Gretchen Whittmer, and renowned attorney, Matt Abel, Founder of Cannabis Counsel, P.L.C., co-drafter of the Michigan Regulation and Taxation of Marihuana Act, and a sought-after pinnacle speaker on cannabis law throughout the country.

By the end of the event, new connections were made, information and education flowed, and a strong commitment of advocacy and industry was established between the those of senior wisdom and the newbies in the industry. Tong’s vision was secured, as is the venue for next year – you will want to set the dates aside to assure your attendance for next year!