“The thing I’ve noticed in boxing is that it is always the B fighter who finds himself on the losing end when a fight is stopped due to some irregularity.” This remark was uttered by the late Cedric Kushner, still relatively early in his boxing career as a manager-promoter when, while waiting for a flight at Chicago’s Midway Airport following a fight the previous night in 1984 in which Tony Tucker had been awarded a two-round stoppage win over Dave Johnson.

END_OF_DOCUMENT_TOKEN_TO_BE_REPLACED

Detroit bantamweight Jarico O’Quinn, 7-0-1, will make his maiden main-event go Friday night at Warren, Michigan’s DeCarlo’s Center, a Second to None Promotion, against a very experienced Nick Otieno, a 43-fight vet who has 31 wins and who has never been stopped.  O’Quinn, inactive since August (two fights have fallen out on him), relishes the action, but sees no big handicap for in fighting a boxer with so much pro experience.  O’Quinn had been hoping to fight eight rounders by now, but all will presumably be well if Otieno shows up.  He hadn’ t shown at the weigh-in by seven o’clock, an hour-and-a-half after the designated time for the weigh-in.

END_OF_DOCUMENT_TOKEN_TO_BE_REPLACED 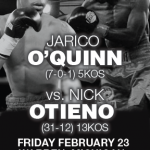 DETROIT (February 20, 2018) – The DeCarlo’s Banquet & Convention Center in Warren, Michigan will be hosting an excellent night of professsional boxing this Friday, February 23rd with action starting at 8 PM. Topbreed Management along with Second 2 None Promotions’ first fight card of 2018, The Best of Tomorrow 3: The War in Warren tentatively features 10 exciting matchups put together by matchmaker, Aaron Rodriguez.
END_OF_DOCUMENT_TOKEN_TO_BE_REPLACED