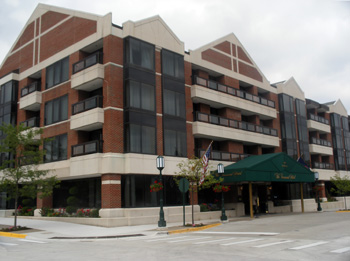 Now more than ever it seems as though the green movement has become a trend in metro Detroit. But for a luxury hotel located in downtown Birmingham, being green is more than just a tag line to gain publicity or make money.

A true Michigan gem and a Forbes 4-Star hotel, the Townsend was originally built in 1988. In more recent years, the hotel has implemented a number of routines, practices and precautions to reduce energy consumption recycle and save money. According to Director of Engineering Jason McGraw and Director of Housekeeping Rupal Baxi, the Townsend makes many efforts to be environmentally friendly.

McGraw, who has been with the company for seven years, said he believes one of the most important things the hotel has done to reduce consumption has been replacing incandescent light bulbs with compact fluorescent light bulbs (CFLs), which generally use about 75 percent less energy than other lighting options. The lighting at the Townsend is approximately 80 percent fluorescent.

Although there are many other efforts the staff makes to be green, Baxi said she has seen a significant increase in the amount of guests that utilize the linen and towel reuse program, which allows the housekeeping department to reduce its consumption of not only energy but also water and detergent.

In addition to the larger efforts made by the staff to help fight global warming, Baxi said there is a number of other smaller efforts being made that even the guests may not always notice. For example, even the pens and paper on the nightstands and coffee tables in each guest room are made partially from recycled materials. In addition, fresh flower arrangements are placed only in the occupied rooms in the building at any given time.

Even though the staff at the hotel realizes that going green can have a lot to do with publicity and public relations, they also recognize that it’s something more than that. “A major portion of it is that it’s the right thing to do, both for our community and the environment,” McGraw said.

The Townsend Hotel has recently earned Steward Certification by Green Lodging Michigan (GLM), a joint program through Michigan’s Energy Office and the Department of Environmental Quality that was designed to promote Green Lodging in the state through encouraging hospitality facilities to put into action eco-conscious practices. McGraw said he hopes the hotel will soon earn Leader certification, which is the highest level recognized by GLM.

For more information about the Townsend Hotel, please visit http://www.townsendhotel.com.