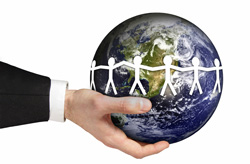 Global warming, climate change and air pollution – these are just three of many short phrases that prompt anyone who’s environmentally conscious to put up a red flag. But many people and companies around the nation are taking these phrases as more than just warning sign; it’s clear that many efforts are being made and many steps being taken nationwide to prevent these three things, even on a large retail level.

What began as an effort by Wal-Mart to reduce its level of air pollution has turned into many companies following suit. Last February, Wal-Mart announced its plans to cut 20 million metric tons of greenhouse gas emissions from its supply chain by the end of 2015, according to an article in the New York Times. This is equal to removing over 3.8 million cars from the road for one full year.

Since Wal-Mart’s announcement, other companies such as IBM, IKEA and Pepsi have announced that they too will be changing their harmful habits. According to Andrew Winston, founder of Winston Eco-Strategies and co-author of the best-selling Green to Gold, this new trend in retailers is called “greening the supply chain.”

Winston said in an article from Sustainable Life Media that such companies are setting new, tougher standards for themselves. In addition, some of the companies are even getting directly involved with how suppliers operate and make their products.

For example, Wal-Mart plans to achieve its goal by focusing on the production of some of the most popular items that it sells, including milk, bread and clothing. Pepsi’s Tropicana division has worked with suppliers to create low-carbon fertilizer for its orange groves. IKEA is even working with WWF on a pilot program with 10 suppliers worldwide in order to improve energy efficiency by up to 30 percent.

For more information on what other companies are doing to reduce their carbon footprints and to read Winston’s entire article, visit http://sustainablelifemedia.com/content/story/strategy/ibm_pg_pepsi_others_issue_supply_chain_mandates.