Another World is Possible with US Social Forum 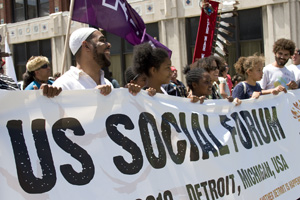 It’s obvious that global warming isn’t the only problem on the minds of Americans. Although many people in the U.S. are concerned with climate change, it’s true that a number of individuals in the country are also aware of issues like social justice, capitalism, media justice, war and more.

The Second United States Social Forum kicked off Tuesday, June 22, 2010, in Detroit, and it attracted crowds of people who gathered from around the country to share ideas about these issues.

The USSF is considered by many to be a movement-building process. “It is not a conference but it is a space to come up with the peoples’ solutions to the economic and ecological crisis,” according to the USSF Web site.

The five-day forum encompasses a series of events throughout Detroit that includes several workshops at Cobo Hall as well as tours that will familiarize visitors with the city. In addition, People’s Movement Assemblies, a series of concerts, a film festival and several art galleries will also be found during the course of the week.

Even though the USSF workshops will focus on many diverse topics, there were a number of discussions that took place on the first day of the event that centered specifically on the environment. 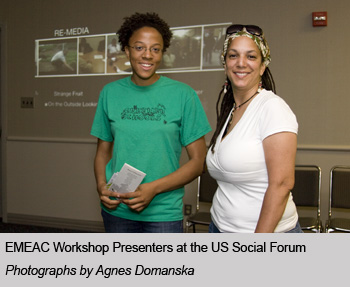 Included in the first day’s workshops was a presentation titled “Detroit Highlighted: East Michigan Environmental Action Council.” EMEAC originally began as a response to environmental concerns in southeast Michigan during the 1960’s. Today, it continues to work in the legislature, courts, township halls and schools to help enact environmental laws and policies to protect air and water quality, wetlands, natural areas, farmlands and even wildlife.

The USSF will continue every day this week until Saturday, June 26, 2010. Among the many environmental organizations that will hold workshops are Global Exchange, Energy Justice Network, Recycledcarbon, Center for Biological Diversity, Energy Revolution, AfroEco, Literacy for Environmental Justice, Green for All and many more.

For more details about the USSF, visit www.ussf2010.org.