The world famous Empire State building has now become one of the largest purchasers of renewable energy, after the administrators signed a deal to purchase more than 100 million kilowatt hours (kWh) of wind energy over the next two years.
Malkin Holdings, supervisor of The Empire State Building, announced yesterday that it has selected Green Mountain Energy Company to supply all its electricity from its portfolio of wind farms as part of the company’s latest effort to reduce the iconic building’s carbon footprint. The two-year contract, to buy nearly 55 million kWh a year, is more than double the amount of renewable energy purchased by any other commercial customer in New York City.
The deal is expected to offset nearly 100 million pounds (about 45 million kilograms) of carbon dioxide emissions each year, equal to nearly every house in New York State turning off all their lights for a week.
The deal is the latest chapter in Malkin’s efforts to boost The Empire State Building’s green credentials, which has already resulted in a $13.2m refurbishment programme that saw all the skyscraper’s 6,500 windows fitted with a new form of insulating glass. Malkin president Anthony E. Malkin said the company’s trailblazing measures would allow the building to attract good tenants and charge higher rents. 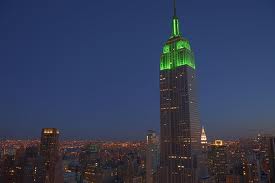 “Clean energy and our nearly 40 per cent reduced consumption [..] gives us a competitive advantage in attracting the best credit tenants at the best rents,”  he said. “Our program of innovation at the Empire State Building shows simple, replicable, non-proprietary steps for other landlords to follow to be more energy efficient, cleaner and greener.
The Empire State building will now slot into 18th position on the Environment Protection Agency’s league table of 100 per cent Green Power Purchasers, for companies that buy green power to meet all their US electricity use.
Source: King Kong
Driving round the world in two electric cars 7th Annual SOS Conference