This year’s 15th annual Urban Wheels Awards program featured a Green Car and Technology Exhibit in the Grand Ballroom of the MotorCity Casino Hotel on Jan. 9, 2011.
Besides showing off green cars (both passenger vehicles as well as race cars), the exhibit included a “Green Career” panel featuring engineers and technology representatives from automotive and technology companies who discussed jobs and career development in the alternative fuel, hybrid and green related fields.

All the panelists were upbeat about job prospects in the green automotive industry. Engineers with backgrounds and education in power electronics, battery packs and motor technology are valued at Chrysler, according to Anderson. In fact, he stated that Chrysler is hiring such engineers, including those who can do systems integration work. He directed audience members to visit www.chryslercareers.com.

While Anderson noted that master’s or doctoral degrees are often preferred, not all jobs require that level of education. Acknowledging that green technology has spilled over into the racing industry, Harold Martin noted his company uses skilled individuals with fabrication experience who can work on mass reduction, in addition to engineers who work on control systems.

“We find there are a lot of jobs for people who are learning trades, like electricians,” added Bruce Westlake.

Oliver Baer advised audience members that retraining money is available from the Michigan Department of Labor, Energy and Economic Growth for employers to retrain welders and others in skilled trades for new alternative energy and green jobs (http://michigan.gov/dleg).

Anderson of Chrysler also explained that the Michigan Academy for Green Mobility Alliance (http://www.sae.org/training/magma/) is working with DLEG and colleges to identify employers’ needs so that certificate training can be provided at local colleges. “There is money out there to help with tuition,” he added.

A “bottleneck” for making green vehicles, according to Pete Deputla, are charging stations. He said, “You want a car you can charge everywhere. It will be a multi-powered car (not just powered by electrical power).” Panelists suggested that future car owners may plug-in their vehicles for a charge at a shopping center parking lot, or even a local Meijer’s.

“One of the keys for infrastructure will be to have standards in place. The Society of Automotive Engineers is working on that,” explained Anderson. “The plug that goes into a vehicle charger connector needs to be standardized.” 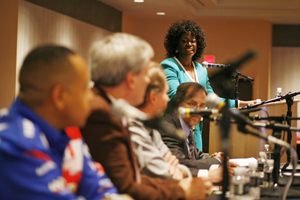