While scanning the horizon in a sea of mostly grim economic news, I found three gems …news reports or economic indicators, if you will, that point to solid and profitable growth in the renewable energy sector of the economy in the near, 3-5 year term.

These indicators point toward a shift in the financing, production, consumption and distribution of alternative energy, predicated on advances in technology that will bring the productions costs down to a competitive plateau with conventional fossil fuels.  I suspect the time it takes from ‘innovation in the laboratory’ to diffuse into the commercial market place has to be reduced from years to months or less, in order for this to work. When investors like General Electric, Google, and MIT, direct research and investment on this scale …it just might tip the balance.

1. The cost benefit ratio of ‘coal fired’ electricity vs. ‘solar’ will equalize or fall in favor of solar. In a recent report from Bloomberg news, Mr. Mark M. Little, the global research director for General Electric Co., predicts that solar power may be cheaper than electricity generated by fossil fuels within 3-5 years. A combination of rising energy prices with lower production cost and higher efficiency will make solar cost competitive with conventional coal fired electric generation. General Electric (GE) plans to invest in ‘advanced’ solar panel manufacturing and expects to open a plant in 2013, employing over 400 people and make enough solar panels to power 80,000 homes.  If this business plan unfolds as predicted, watch for explosive growth on all fronts the solar industry. Read full report: www.bloomberg.com/news/2011-05-26/solar-may-be-cheaper-than-fossil-power-in-five-years-ge-says.html

2. Major advance in battery technology will change the automotive playing field. The ‘energy density’ ratio of stored battery power vs. liquid fossil fuel will get closer giving the battery powered automobile the range you’d expect from a tank of gas …with much faster re-charging time.   In a press release from the Massachusetts Institute of Technology dated June 6, 2011, researchers announced they have devised a radical new approach to battery construction that provide an inexpensive, smaller, and lighter, alternative to existing battery technology. This is the ‘breakthrough’ technology needed to make electric vehicles affordable and practical. To see the technical details and to read the full press release: http://web.mit.edu/newsoffice/2011/flow-batteries-0606.html

3. New financing models from GOOGLE bring solar to roof tops.  Google recently announced a $280 million partnership with California installer, Solar City www.solarcity.com to set up a financing model that offers residents a roof top solar system for no money down. In exchange, customers agree to pay a set price for the power produced by the panels. This is largest solar initiative of its kind in US that will facilitate cost competitive utility scale power generation and distribution to thousands of homes.

To date, GOOGLE has invested over $680 in renewable energy projects with the goal of making the company a ‘net zero’ user of electric power. This corporate philosophy is based on the bottom line premise that solar will cost the consumer less than conventional fossil or nuclear.  We will all be watching this project to see how it plays out, both in KWh generated and return on investment. If this investment model works for GOOGLE, maybe other corporate investors will follow. Read the full press release: http://news.yahoo.com/s/ap/20110614/ap_on_hi_te/us_google_solar 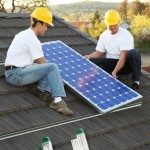 Click here to be introduced to Elbinger Media Group