The Vehicle City area is charging up possibilities of an electric future for cars and truck.As part of that effort, the Ann Arbor-based Clean Energy Coalition gathered Tuesday with Flint-area business and municipal leaders at the offices of the Genesee Regional Chamber of Commerce.

The goal was to exchange information and answer questions about how to prepare for more electric vehicles in the future. 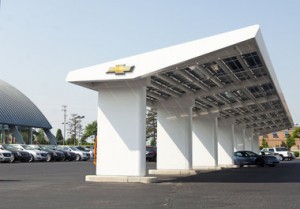 “The reason the Department of Energy is interested in electric vehicles is that it’s one way for us to have access to domestic energy sources,” said Heather Seyfarth, a project manager with the Clean Energy Coalition.

Working with a $500,000 Department of Energy, the Clean Energy Coalition is meeting with city planners, zoning administrators, electric inspectors and large energy users across the state to address key concerns related to electric charging station deployment.

“It’s mostly clearing away red tape and making sure different municipalities have everything in order if someone wanted to install a charging station, said Rabinsky.

Rabinsky says some Genesee County groups have shown they’re already “ahead of the curve” with electric vehicle concepts. He says the city of Flint could consider vehicle charging stations as part of a new master plan.

Charging stations are already in use, he said, at a Park and Ride lot in Grand Blanc and at the Insight Institute for Neurosurgery and Neuroscience on South Saginaw Street.

The Al Serra Auto Plaza on S. Saginaw in Grand Blanc installed a solar-powered charging station eight months ago. Joe Serra, president of Serra Automotive, says the facility is being used “by a few vehicles a week.”

Serra says it is his hope the solar-powered facility will help him reduce costs and allow him to sell energy “back to the grid” one day.

Tuesday’s meeting was organized by the E3 Innovation Network of the Genesee Regional Chamber of Commerce which focuses on Environment, Energy and the Economy. Chamber officials see benefits from the Clean Energy Coalition planning process once it is complete in July.

“The E3 network is already supporting efforts for local organizations to grow in the green sector,” said Janice Karcher, Vice President for Economic Development at the Genesee Regional Chamber of Commerce. “We certainly expect when the plan is developed it could lead to additional installation.”

Click here to be introduced to the Clean Energy Coalition