I’m writing to you today as a mom. When my husband and I decided to start a family, we wanted to make sure our baby girl, Hazel, came into this world healthy. I made sure to steer clear of certain types of fish prone to high mercury levels due to coal plant pollution. I didn’t want to put my baby at risk for the types of developmental problems mercury can cause.1

Not every mom is as lucky as I was to know about the dangers of mercury. I recently read that one in ten newborn babies in Minnesota had unsafe mercury levels due to the fish their mothers ate.2 I’m sure those moms had no idea they were putting their babies at risk!

I was thrilled when the EPA issued new safeguards limiting the amount of mercury coal plants can pump into our air. Unfortunately, Sen. Inhofe (R-OK) is proposing legislation to repeal these life-saving protections — putting the health of thousands of mothers and babies on the line.

Help me send a Mother’s Day message to Congress. Tell your senators that we won’t stand for any legislation that sacrifices the health of our moms and babies just to line the pockets of Big Coal CEOs!

Right now we have the technology to limit mercury pollution from coal plants but some operators have refused to update their power plants. The only way we can keep more moms and babies safe is to support the EPA’s safeguards and require coal plants to deal with their mercury pollution. In the 21st century, no mother should be exposed to dangerous levels of mercury. It’s inexcusable.

My daughter Hazel is now turning two. If and when she starts a family of her own, I hope she won’t have to worry about eating fish because 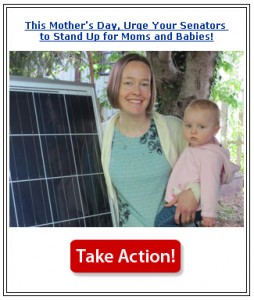 of mercury raining down into our rivers, lakes, and oceans — we’ll be powering our country with clean energy.

Join me to stand up for Hazel and all our sons and daughters. Let’s send 20,000 Mother’s Day messages to Congress urging our senators to oppose the bill to repeal the EPA’s mercury health protections.

When the EPA established national mercury safeguards in January 2012, it was a true people-powered victory. Over 800,000 Americans wrote to the White House in support of the standards — more than have ever commented on any issue before the EPA. Congress called for these mercury protections over 20 years ago, but the coal industry succeeded in blocking them for decades. It was grassroots pressure and demand that finally overcame that resistance.

Now that we’re faced with new challenges to the EPA’s mercury safeguards in the Senate, I know that if we work together we can overcome Sen. Inhofe’s attack.

The Senate will vote on this legislation soon and it will be close. As we spend the day honoring the women in our lives, tell your senators to stand up for mothers and babies and oppose Sen. Inhofe’s dirty bill.