Stars and Cars Sleek and Sexy at 2014 Urban Wheel Awards

While it’s a recurring theme and one that automakers and suppliers to the industry have thoroughly embraced over the years, it’s one that has never been more clearly demonstrated than at the 18th annual version of the Urban Wheel Awards, held on the eve of the Press Days for Detroit’s 2014 North American International Auto Show.

Held this year Jan. 12 at the Detroit Marriott at the Renaissance Hotel, the event (organized by Decisive Media) showcased some of the most worthy examples of diversity in action throughout the auto industry as well as several key products.

Notable individuals and their awards included:

2014 Pioneer of the Year Award:
Leon Richardson
Born in Hamtramck, Mich., and raised in West Haven, Conn., Richardson served as a U.S. Marine before earning a business management degree at the Detroit College of Business. 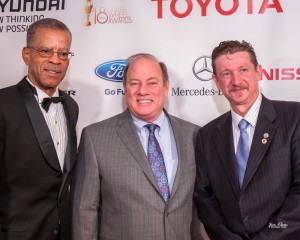 Currently serving as chairman of the National Association of Black Suppliers, Richardson is a board member of both the Michigan Minority Supplier Development Council, and co-chairs the General Motors Corp. Supplier Diversity Council. He is also a former executive board member of Suppliers for the Environment and the Chemical Management Suppliers forum.

African-American Dealer of the Year:
Dorian Boyland
CEO, Boyland Automotive Group
A graduate of the University of Wisconsin-Oshkosh (business and accounting) and a former pro baseball player (he was a member of the 1979 World Series winning Pittsburgh Pirates), Boyland has spent the past 30 years in the automobile business, owning and/or operating some 21 dealerships in seven states.

With revenue of more than $5 billion, the Boyland Group holds a litany of sales awards, but none of them greater than the individual persona of its CEO.

“My mother gave me great advice: stay out of trouble, get good grades and act like I am 100 percent of the time looking over your shoulder,’” Boyland told the audience. “Mom, I hope you are proud to see what I have done.

Asian Dealer of the Year:
Rahim Hassanally
President, Momentum Auto Group
A first-time car dealer at the ripe age of 26, Hassanally now operates a business that includes some 16 franchises and employs more than 250 people, generating $300 million in revenue from a base in Fairfield, Calif.

“I saved my money, looked at a lot of different stores and found this store within my budget,” says Hassanally, now 34. “I’m a very driven person. I have goals. I set my mind to them and don’t let up.

Hispanic Dealer of the Year:
Manuel Gonzalez – Sterling Auto Group
A native of Cuba, Gonzalez immigrated to the United States in the 1970s with the hope of owning his own business.

Earning both undergraduate and graduate degrees in chemical engineering, the entrepreneur worked in multiple industry capacities prior to opening his first independent dealership in 1992.

For the last 25 years he has been passionate about the automotive industry, currently serving as president of Sterling Auto Group in Bryan/College Station, Texas.