Help Build the Road to the Third U.S. Social Forum in 2014 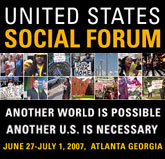 After the last census in 2010, we learned that 2.6 million more people had slipped into poverty in the United States! As of 2012, the number of US residents living below the official poverty line is 46.5 million people, the highest absolute number in more than half a century. More and more folks in the US are chronically unemployed. Our nation’s capital has the highest rate of homelessness in the US. The list goes on. So what are we going to do about it?
Since 2005, the US Social Forum has created and held a space for social movements from diverse fronts of struggle to build relationships, collaborate, deepen political analysis, and facilitate strategic discussion to expand political understanding and strategic direction to build a powerful political force. With key forum events in 2007 and 2010, the USSF’s impact on poverty and many social issues is clear: The USSF unites progressive social movements to build power to create a new world.
How will you contribute towards social transformation? What is your contribution to our collective value? How will you sustain the vision of a world that embodies cooperation, collectivity, justice, equality and democracy?
Is $25 enough?
Your contribution of $25 will support the 2014 kick-off event of the People’s Movement Assemblies, which will pave the road to the 3rd USSF! (Click to donate)
PMA’s gather people from local and regional organizations within key fronts of struggle as part of the US Social Forum’s movement-building work. PMAs are strategic foundations for developing our political and revolutionary consciousness. They develop political content and alignment among movements. PMA participants vision the world we want and through campaigns and strategic movement agendas create short, medium, and long-term demands and collective actions to transform society and protect our earth.
You can send money, and you can contribute by helping us get the word out! Come and build with us at the PMAs in 2014:
March 30, 2014 SOA Watch Thematic PMA, Washington, DC, SOA Watch lead organization
April 2014 Bellingham, WA Farmworker PMA
Sept 24-26, 2014 Pacific/North West Social Forum & Regional PMA
Sept/Oct 2014 3 Move to Amend Thematic PMAs on “A Democratic Constitution” – Oakland, Salt Lake City, Philadelphia, Move to Amend lead organization
Fall 2014 in West Virginia: Appalachian Regional PMA (DAWG and USSF Poverty Working Group) for more info or to get involved contact Direct Action Welfare Group at info@wvdawg.org
Fall 2014 Ft. Collins, CO local PMA.
Other Local PMAs Coming in 2014:
Louisville, KY
Southern Movement Assembly, Project South
Poverty Working Group PMA and World Courts of Women in the Midwest region and Southern region with follow-up from Western region and Northeast region.
Your contribution of $25 will support the wheels of motion that transform our society into one that