Chealsea, Michigan. Three awards; 1.Energy awards for Leadership, 2. Exemplary Project of 2014, and 3. Appreciation Award were presented by Todd O’Grady, President of the Great Lakes Renewable Energy Assoc. (GLREA), at the organization’s annual meeting on December 6 in Chelsea, Michigan. The Exemplary Project Award was for the 1-800-LAW-BUILDING and presented to Srinergy, 1-800-Law-Firm, and Lean & Green Michigan. The Appreciation Award was presented to Mary McGraw, GLREA Treasurer, for her outstanding service to the organization.

John Hieftje received the Jennifer M Granholm Energy Leadership award. John retired as Mayor of Ann Arbor after 14 years of environmental and energy leadership. Besides hosting the Rio +10 North America Preparatory Conference in Ann Arbor his first year in office, he also created the Mayor’s Green Fair which has been held every June since his first year. In 2006 he announced “Ann Arbor’s Green Energy Challenge” which called for all City operations to run on 30% green energy by 2010 and the community to use 20% green energy by 2015. Programs including using biodiesel in all City trucks, capturing landfill gas, utilizing hydro power from refurbished dams, upgrading energy efficiency in all City operations and installing renewable energy systems at numerous City facilities. Ann Arbor was the first City in the world to do a large scale conversion of downtown lighting to LED lights. Recent accomplishments include Ann Arbor’s adoption of a Climate Protection Plan that calls for a reduction of climate change emissions of 25% by 2025 and 90% by 2050.

The Great Renewable Energy Assoc. is a statewide non-profit that provides education, training, and advocacy to encourage a greater use of renewable energy in Michigan. www.glrea.org 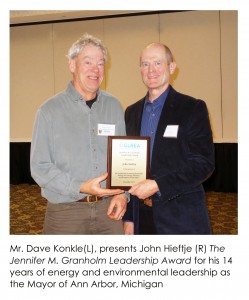 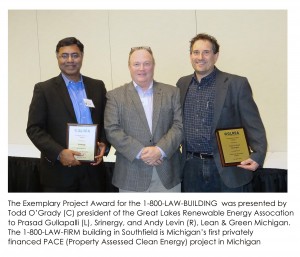