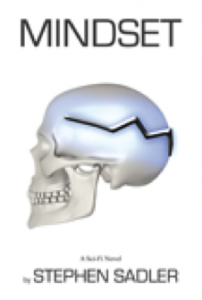 Orion, MI – Stephen Sadler, CEO of SCATE Technologies, Inc. and Buz.FM, released his latest book, Mindset, (published by ADAS Publishing) January 1, 2015. In the story, neuroscientist Jack Cooper has just finished his latest invention, the Mindset – a Bluetooth headset device that converts thoughts to text by reading and storing a user’s brainwaves. When a Venture Capital Firm starts to back the technology, they decide the device has more valuable applications, particularly with the upcoming election. By implanting thoughts, and stimulating the pleasure center of the brain, they begin to brainwash people into voting for the Presidential Candidate, Rob LaVie. As he races across the country, Jack attempts to protect his family and distinguish the truth from the lies, in a journey that could change his reality forever.

Having developed various technologies over the years, Sadler began formulating a new device that uses EEG sensors to convert a user’s brainwaves to text. Rather than bring this device to the physical world, Sadler stated that, “I came to a point in my life where I still loved inventing and creating, but I was tired of having to make things work and keep them operational. … When I write, especially sci-fi stories, I still feel the same reward of invention and creation; however, I don’t have to write one line of code.”

Stephen Sadler was born in Nottingham, England to Alfred and Constance Sadler in February of 1965. Shortly after his older sisters, Glenise and Jennifer, had moved to Canada, he and his parents relocated to Toronto, and then Blenheim a few months later.

Throughout primary school, in England, Sadler unknowingly struggled with dyslexia (it wasn’t until his adult years that he learned of his disorder). Sadler recalls specific times when he would be asked to read aloud in class. When he failed, he would be asked to read alone in the hallway, while the rest of the class continued. It wasn’t until the age of twelve, after Sadler and his family moved to Canada, that a Blenheim school teacher helped him to read. Currently, Sadler continues to struggle with mild dyslexia when reading linearly and writing.

Sadler attended school in Canada from grade four to grade twelve, graduating from Ursuline College Catholic Secondary School in 1983. Sadler struggled to apply himself academically in high school, but he excelled in the science fairs that he entered. However, it wasn’t until university that Sadler realized he had potential. In 1983, Sadler had his first child, Michael Sadler and, leading up to 1992, had several jobs that included Posted Welder at Elan Tool & Die and Robotics and CAD Design Engineer at Veltri Stamping Inc.

Currently, Stephen leads two software development businesses, SCATE Technologies and Buz.FM and, despite his dyslexia, has written two books: Exposure to Closure and Mindset. For more information on Stephen Sadler, you can check out his website http://stephensadler.me.