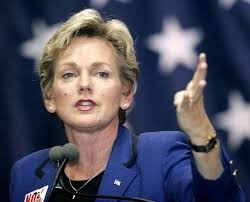 Governor Jennifer Granholm will keynote at the Michigan Clean Energy Conference and Fair on Saturday, June 24.  Still very active on clean energy issues, Gov. Granholm will provide a national perspective on where our country is headed.  There will be many interesting break-out sessions including community solar, financing, workforce & economic benefits, and local government efforts to achieve 100% renewable energy goals.

The break-out session on policy development will focus on the distributive energy tariff being discussed and developed by the MPSC.  This critical issue for the solar industry and supporters will be discussed by Julie Baldwin, MPSC, Douglas Jester, 5 Lakes Energy, and Liesel Clark, Michigan Energy Innovation Business Council.  The Fair on Sunday will give you an opportunity to continue to find out the latest on policy, programs, and technologies.  You can pre-register for both the conference and fair at www.glrea.org.

Consumers Energy will ask the MPSC to approve a “green energy rider tariff” that would allow large companies to purchase 100% renewable energy.  Last year, Consumers announced it would supply 100% renewable energy to the new Switch data center in Grand Rapids.  DTE also expects to submit a similar green energy rider to the MPSC for its planned community solar projects that could total up to 100 MW in 2016.  More details.

DTE Energy has announced an initiative that will reduce the company’s carbon emissions by more than 80% by 2050.  DTE will achieve these reductions by using more renewable energy and natural gas for generation, continuing to operate Fermi 2, and strengthening energy efficiency options for customers.  DTE’s plans include an additional 6,000 MW of renewable energy, addition of 3,500 MW of natural gas, retirement of aging coal plants, investment of $5 billion over the next 5 years to modernize electric and gas infrastructure, continued investment in energy efficiency, and reduction of energy and water within DTE’s own facilities by at least 25%.  More details.

A2 Solar Club, a city-backed program offering group purchase on solar panels, has had six installations completed and at least 12 more are in the works.  The 18 projects amount to 99.5 kW of solar.  Active inquiries from other Ann Arbor residents could add another 110 kW.  The local nonprofit Clean Energy Coalition and a West Virginia company Geostellar partnered with the city of Ann Arbor to launch the program in January.  More details.

Biodigester in Newaygo County is getting a second life.  San Francisco-based Generate Capital has purchased the facility after the former owner, NOVI Energy, lost the plant to receivership.  The Fremont Community Digester, which cost $22 million, opened in 2012 as the first large facility in Michigan to turn organic waste into renewable energy. A power purchase agreement remains in place with Consumers Energy, but the next step will be finding firms in the area to provide feedstock.  More details.

Michigan’s 138-year-old Capitol Building will get a $70 million upgrade that will include a new geothermal system for heating and cooling.  The planned closed-loop system involves drilling about 200 wells roughly 450 feet on the west side of the building. The new heating and cooling will be coupled with other energy efficiency upgrades, particularly lighting, that aim to cut the Capitol’s $800,000 annual utility bill in half.  More details.

Tesla and Green Mountain Power are offering a low price for home backup batteries – $15 per month.  GMP has to get 2,000 customers to sign up and make sure they capture the additional grid benefits from each Powerwall 2. That’s less than half the $37.50 per month that GMP set for its first test-run offering of Powerwall in late 2015. The difference in prices comes from two main sources. The first is Tesla’s improvement to its promised Powerwall 2.0 (twice the energy and almost twice the power) and the second is the additional grid benefits available through use of Tesla’s GridLogic software.  GMP CEO Mary Powell will speak at the Michigan Clean Energy Conference & Fair on June 24. More details.

Total Solar Eclipse on August 21will travel across North America and put grid operators to the test.  This is especially true in California where solar makes up 10% of the electricity mix.  For several hours on August 21, the moon’s shadow will trigger a 6,000 MW shortfall. While the generation loss is significant, it’s not the only factor that CAISO, the grid operator, needs to handle. CAISO also has to manage the ramp rate, which will see the eclipse cause solar generation to drop off at 70 MW per minute, then ramp up at 90 MW per minute as the shadow passes. CAISO’s typical ramp rate is 29 MW per minute. CAISO is looking at managing the eclipse by securing generation from hydropower and natural gas and using them to manage the ramp.  More details.

Indiana Gov. Eric Holcomb has signed Senate Bill 309 which gradually lowers the reimbursement for net metering.  Installing solar panels or wind turbines by the end of this year will get the higher retail rate for their excess energy for 30 years. Those who install solar or wind devices in the next 5 years will get the full retail rate for up to 15 years, but the longer people wait, the fewer number of years they will have at that rate. After 2022, anyone who installs solar or wind will receive a lower wholesale rate plus a premium of 25 percent.  More details.

Missouri Legislature recently refused to pass HB 340, which would have allowed utilities to impose additional fees on Missourians who produce their own renewable solar power, thereby increasing utility bills by 75 percent, according to The Missouri Times.

Greener Trains are coming to the Great Lakes region.  The Siemens Chargers, which are due to arrive by fall, meet the EPA’s “tier four” standards, the agency’s highest standard for emissions.  Besides leaving a smaller carbon footprint, the locomotives can get up to speed faster than older models. A 94-mile section of track between Porter, IN and Kalamazoo could see trains flying through at 110 miles per hour.  More details.

Solar Panels printed on sheets of plastic are having final trials at the University of Newcastle in Australia. Using conventional printing technology, electronic ink is printed onto clear plastic sheets with the finished product incredibly lightweight. More details.

Lakeshore Solar Users Network will have a launch meeting on Wed., June 7, 6-8 pm at Brewery Vivant, 925 Cherry, Grand Rapids.  LakehoreSUN will be a new local chapter of the Michigan Solar Users Network, an informal group of solar users and supporters that have formed to share information.  The meeting is sponsored by GLREA and GreenMichigan.org and will include solar stories by two homeowners and discussion about starting LakeshoreSUN.  Kris Hunter, Hunter Energy Resources, will host the meeting.  Solar users and anyone interested in solar energy are encouraged to attend.  RSVP to khunter.energy@gmail.com.

TRC will host Developing Solar on Brownfields and Landfills in Chicago on June 12-13.  The conference is designed to connect public and private brownfield/landfill owners with solar developers. A half day urban track will be devoted to discussing small brownfield sites in inner cities.

Building Operator Certification (BOC) program graduates in Michigan have proven to save an average of $10,800 annually on electric bills.  Michigan Energy Office is offering a discounted tuition for public building operators interested in an upcoming training at Mott Community College beginning on June 14.  There is also upcoming training at Northern Michigan U beginning on August 10. BOC training includes 74 hours of classroom and project work in building systems operation and maintenance.  http://boccentral.org/training-michigan

Michigan Clean Energy Conference & Fair will be hosted by GLREA and the Groundwork Center on June 23-25 in Traverse City. The event will include a “Future of Mobility” panel Friday evening, a full day energy conference on Saturday, and a hands-on Sunday fair featuring solar workshops, demonstrations and exhibits.  Pre-register now at www.glrea.org.

ASES’s 46th annual conference, “SOLAR 2017: Building a 100% Renewable Energy Community,” will be held October 9-12 in Denver, between the weekends of public days at the U.S. DOE Solar Decathlon.  Registration for SOLAR 2017 is now available online.
Click here to be introduced to GLREA